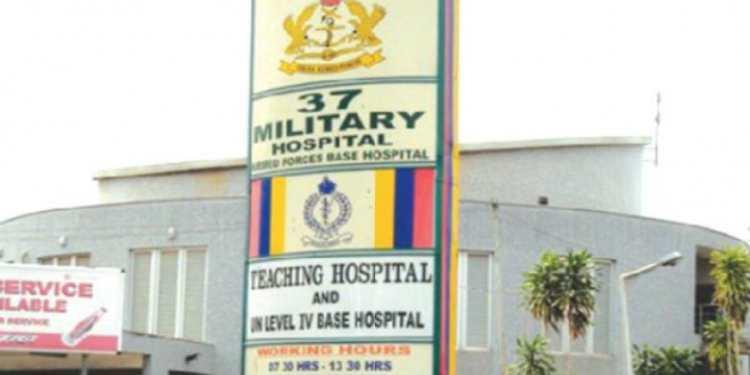 The 37 Military Hospital has been slapped with GHS1,075,000 in damages for the negligent death of a 27-year-old woman during childbirth in November 2015.

The General Jurisdiction 6 Division of the High Court awarded the father and husband GHS400,000.00 each for loss of expectations of life; GHS50,000.00 in damages of mental distress also to them, GHS100,000.00 to the baby, Yaw Nyamekye in damages for pain and suffering.

The woman, Helena Brema Nyamekye, who was a PhD student at the University of Ghana at the time of the incident, is said to have opted for a caesarean section as her preferred mode of childbirth.

Doctors however denied her the option and put her through normal labour.

In the process, however, Mrs. Nyamekye bled profusely at the theatre and died.

Her baby, Yaw Nyamekye, also suffered a deformity to his right arm upon delivery.

The husband of the deceased, Captain Nyamekye (Rtd), and the father of the deceased subsequently sued for damages for loss of life, trauma and negligence, as well as General damages.

In their defence, doctors argued that Mrs. Nyamekye had earlier agreed to a vaginal delivery upon medical advice, but changed her mind and opted for a caesarean section.

According to the defence, the request for a CS came rather too late, and the doctors could not have done otherwise.

The court however found from the evidence that the request for a CS was made on the morning of November 11, 2015,  and could not have been said to have come late.

Trial Judge, Justice Kwaku Tawiah Ackaah-Boafo, noted that the Hospital did not provide any “plausible or reasonable explanation” as to why the request for a CS was not met.

He also observed that though experts in the field knew what was best for the deceased, there were no doctors or house officers during Mrs. Nyamekye’s labour to review the process and so no proper monitoring was done on her in the process.

The deceased also suffered High Blood Pressure in her lifetime, and the doctors admitted that she bled to death.

According to Justice Ackaah-Boafo, “her death was a preventable one”.

“The only logical confusion the court ought to come to is that the deceased died out of injuries caused her.”

He also observed that blood that was requested to the theatre during the process, and was subsequently delivered, had not been used in the procedure.

The judge, subsequently, concluded that the doctors and nurses on the patient were negligent in the discharge of their duties.

The 37 Military Hospital, the judge said, is liable for the negligence of its staff that resulted in the death of Mrs. Nyamekye.

Justice Kwaku Tawiah Ackaah-Boafo lamented the increasing cases of lack of attention in the country’s medical facilities and admonished that health caregivers, like drivers on the road, must be attentive to duty and discharge their burden with the best possible care.

The 37 Military Hospital is facing another suit brought against it earlier in July 2021.

The family of a patient, Solomon Asare-Kumah, who died after being admitted at the 37 Military Hospital at age 48, sued the management of the facility over alleged medical negligence.

In a writ of summons filed by the lawyer for the family, they listed wrongful insertion of oxygen tube and malfunctioning of a drill meant for surgery, among other things, as the cause of Solomon Asare-Kumah’s death.

The mental distress caused by the death of Solomon Asare-Kumah according to the writ also led to the passing of the deceased’s father.

The family is asking the court for damages in excess of GHS2 million from the 37 Military Hospital.

Some major health institutions in Ghana have been taken on in the past over the issue of medical negligence.

In July 2020, the Ghana Diaspora Women Organisation called for the immediate suspension of two doctors and nurses involved in alleged negligence that led to the death of a patient at the Ridge Hospital.

The administering of wrong medication is believed to have contributed to the death of Madam Esther Sosuh, the wife of Dr. Emmanuel Kuto, who is the Director of the Institute of Languages.

Dr. Kuto’s wife, aged 48-years-old, had been diagnosed with hernia and was receiving treatment after checking in at the facility on June 21, 2020.

The group in a statement complained that “simply too many lives are lost through gross negligence, and enough is now enough.”

It thus demanded that the Ghana Health Service Director-General and the Director of Ridge Hospital “immediately suspend the two doctors and nurses involved in this alleged matter, as we believe their behaviour was unethical of the medical profession.”

Management of the hospital subsequently launched an investigation into the matter.

Ridge Hospital is also facing a GHS5 million lawsuit for possible negligence from a man whose wife and baby died at the hospital.