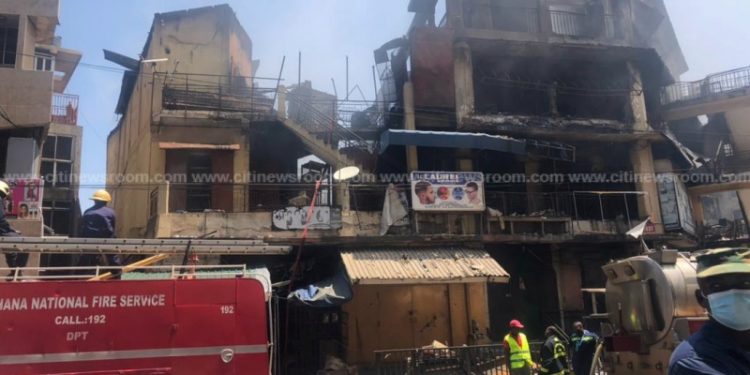 The Ghana National Fire Service (GNFS), says the Architectural and Engineering Services Limited (AESL) will soon conduct a final structural integrity test on the three-storey building that was recently ravaged by fire at the Makola market.

AESL will proceed with its work after officers from the fire service are done gathering evidence to aid in investigations.

The fire incident at the Makola Market affected a 3-storey building on July 5, 2021, and caused damage to valuables running into millions of Ghana cedis.

Head of Public Relations at the GNFS, Divisional Officer Grade 1, Ellis Robinson Okoe, spoke to Citi News about the ongoing investigation into the fire incident.

He added that after investigations are concluded, a report of the incident will be handed over to the Accra Metropolitan Assembly.

A seven-member committee was set up to investigate the fire incident and assess the extent of damage from the fire.

The Committee will also “assess the integrity of the structure and whether it is fit to be there or it has to be pulled down,” Chief Executive Officer of AMA, Mr. Mohammed Adjei Sowah added.

Representatives from the Ghana Police, the Electricity Company of Ghana, the National Disaster Management Organisation, the Ghana Fire Service, the Ghana Water Company, the Ghana Armed Forces, and the AMA, are members of the Committee.

The management of the fire has been criticised due to the Fire Service’s response to the incident.

Some affected traders accused the Fire Service of negligence, saying its response to distress calls was not timely enough.

The Fire Service also complained that the Ghana Water Company did not honour an arrangement to supply water in cases of emergencies.

Fire tenders had to leave Makola and go as far as Achimota, Circle, or Kaneshie in search of water.

The affected building was filled with wigs and other cosmetic products.