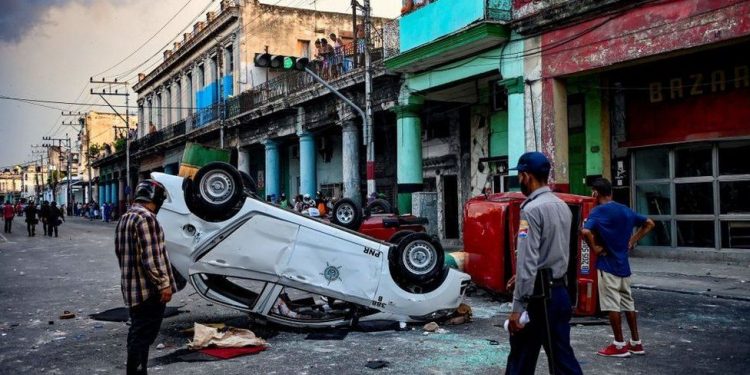 As of next Monday, there will be no limit on such goods brought in by travellers until the end of the year.

Thousands took to the streets on Sunday in protests over food and medicine shortages, price increases and the government’s handling of Covid-19.

One demand they had was for people arriving in Cuba to bring in supplies without paying customs duties.

Dozens have been arrested nationwide since the unrest began on Sunday. Authorities confirmed on Tuesday that one man had died.

Unauthorized demonstrations are illegal in the country, and anti-government protests are rare.

“It was a demand made by many travellers and it was necessary to take this decision,” the prime minister said. The government “will assess things” after 31 December, he added.

Currently, travellers to Cuba can bring up to 10kg of medicine into the country tax-free. However, they must pay customs duties on the limited amount of food and personal hygiene supplies they are allowed to bring in.

It is unclear the effect such a customs change will have. Few people are travelling to Cuba currently amid the ongoing coronavirus pandemic.

“No, we don’t want crumbs. We want freedom,” government critic and journalist Yoani Sanchez tweeted shortly after the announcement. “Blood wasn’t spilled on Cuban streets in order to import a few extra suitcases.”

AFP news agency journalists reported that Cuban authorities had restored access to the internet on Wednesday after three days of disruption. Some messaging and social media platforms reportedly remained blocked on 3G and 4G however, including Facebook, WhatsApp and Twitter.

Mobile internet was only introduced in Cuba in the last few years and allowed people to organize and spread the word of the recent demonstrations.

Andrea Lopez, a resident of the capital Havana, told Reuters news agency she has not been able to get online for days, unable to speak to her husband in Mexico.

“On the first days they cut the calls, they cut everything,” she said. “All of this is how [the government] wants it.”

Streets in Havana were reportedly calmer on Wednesday, although there was a heavy security presence.

Arrests seem to have continued in the country in recent days. Cuban YouTuber Dina Stars was conducting an interview for a Spanish broadcaster on Tuesday when she told the channel that security forces had come to take her away. She later posted about it on Instagram.

And Reuters obtained footage from Tuesday, which it said was of a young man in the southeastern town of Gibara being arrested.

The anti-government protests began on Sunday with a demonstration in the city of San Antonio de los Baños, south-west of Havana, but soon spread throughout the country.

Many were broadcast live on social networks. Posts on social media showed people overturning police cars and looting some state-owned shops, which price their goods in foreign currencies. For many Cubans, these shops are the only way they can buy necessities, but prices are high.

Cuba’s economy is struggling. Tourism, one of the most important sectors, has been devastated by the restrictions on travel during the Covid pandemic.

Sugar, which is mostly exported, is another key earner for Cuba. But this year’s harvest has been much worse than expected.

As a result, the government’s reserves of foreign currency are depleted, meaning it cannot buy imported goods to supplement shortages, as it would normally do.

Cuba has blamed the US and its economic sanctions for the protests and Cuba’s wider problems. On Wednesday, the US called for the release of all peaceful protesters detained in Cuba during the recent unrest.