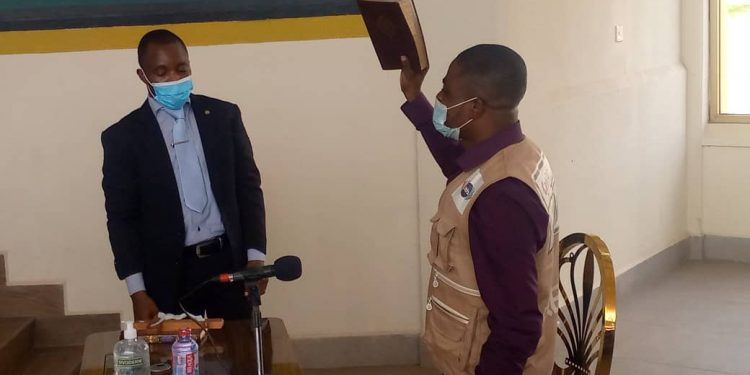 Citi News’ Ashanti Regional Correspondent who doubles as the station’s Middle Belt Bureau Chief, Edward Oppong Marfo, , on Wednesday, July 7, 2021, testified before the ministerial committee probing the disturbances that occurred at Ejura in the Ashanti Region.

He recalled that the disturbances started after residents pelted stones at the police who had been deployed around the burial grounds of the late social activist, Ibrahim Muhammed, alias Kaaka.

“I heard one of them saying they do not need the police there so, I saw some of them with stones and clubs, trying to drive the police away.”

He said the residents were pelting stones at the police to ostensibly express their displeasure about their presence at the burial grounds.

“I saw the water cannon vehicle moving closer to where we were, and I heard one of them [protestors] saying they do not need the police there.”

“Our driver informed us that the window side of our vehicle got smashed during the protest.”

Mr. Marfo among other things provided the committee with video footages his team captured at Ejura.

The journalist also answered several questions on the work of the media generally from the committee members.

The violence, which led to the death of two persons occurred during protests that followed the death of Ibrahim Muhammed, a social activist.

The deceased, alias Kaaka, died after he was attacked by a mob on June 27 while returning home.