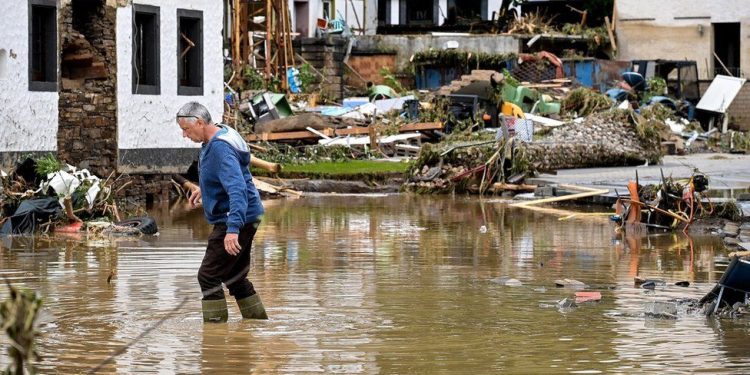 At least 80 people have died and hundreds more are unaccounted for in Germany after some of the worst flooding in decades.

Belgium has also reported at least 11 dead after the extreme weather, which political leaders have blamed on climate change.

Armin Laschet, the premier of North Rhine-Westphalia, blamed the extreme weather on global warming during a visit to a hard-hit area.

“We will be faced with such events over and over, and that means we need to speed up climate protection measures… because climate change isn’t confined to one state,” he said.

Experts say that climate change is expected to increase the frequency of extreme weather events, but linking any single event to global warming is complicated.

The German states of Rhineland-Palatinate and North Rhine-Westphalia were worst hit, but Belgium and the Netherlands are also badly affected, with further flooding in Luxembourg and Switzerland.

In the district of Ahrweiler, hundreds of people are unaccounted for, the authorities say. A spokeswoman for the local government said mobile networks had been put out of action, making it impossible to contact many people.

The village of Schuld (population 700) was almost entirely destroyed.

More heavy rain is forecast across the region on Friday.

Some 15,000 police, soldiers and emergency service workers are at the scene to aid with search and rescue, while helicopters picked stranded residents from roof tops and tanks cleared roads of fallen trees and debris.

Residents in the region told AFP news agency they were stunned by the disaster.

“Nobody was expecting this – where did all this rain come from? It’s crazy,” Annemarie Mueller, a 65-year-old resident of Mayen, said. “It made such a loud noise and given how fast it came down we thought it would break the door down.”

Make all payments through Ghana.Gov platform – NSS to user agencies

Make all payments through Ghana.Gov platform - NSS to user agencies