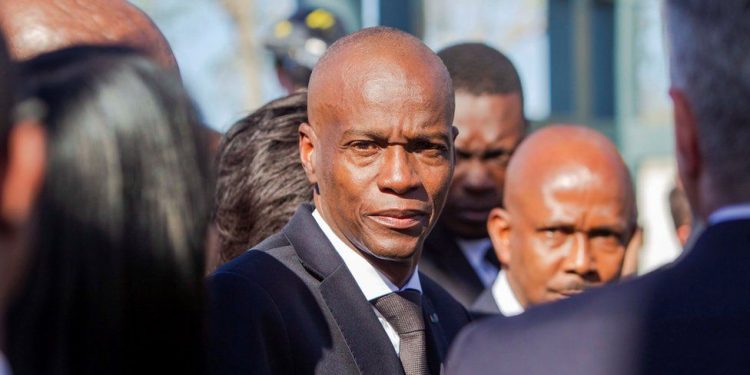 Four people suspected of assassinating Haiti’s President Jovenel Moïse have been killed in a shootout with the security forces, police say.

Two others have been detained, while officers are still in combat with some remaining suspects in the nation’s capital Port-au-Prince.

“They will be killed or captured,” police chief Leon Charles said.

Mr Moïse, 53, was fatally shot and his wife was injured when attackers stormed their home early on Wednesday.

The unidentified gunmen entered the private residence in Port-au-Prince at 01:00 local time (05:00 GMT). Mr Moïse was killed, but First Lady Martine Moïse survived and has been flown to Florida where she is receiving treatment.

She is reported to be in a stable but critical condition.

“Four mercenaries were killed [and] two were intercepted under our control,” Mr Charles said in a televised statement late on Wednesday. “Three policemen who had been taken hostage have been recovered.”

“We blocked [the suspects] en route as they left the scene of the crime,” he added. “Since then, we have been battling with them.”

Speaking after the killing, interim Prime Minister Claude Joseph called for calm and declared a nationwide state of emergency.

The state of emergency, or “state of siege”, allows for the banning of gatherings and use of the military for police roles, along with other extensions of executive powers.

US President Joe Biden offered condolences to the people of Haiti for the “horrific assassination”. UK Prime Minister Boris Johnson, meanwhile, called it “an abhorrent act” and also appealed for calm.

Coups, political instability, widespread gang violence and natural disasters have plagued the country for decades and rendered it the poorest nation in the Americas.

What do we know about the shooting?

Mr Joseph said the attackers were “foreigners who spoke English and Spanish”. Haiti’s official languages are Creole and French.

Some reports spoke of men dressed in black who carried high-powered weapons who may have pretended to be part of a US drug enforcement operation, although no official details have been given.

Haiti’s ambassador to the US, Bocchit Edmond, said there was “no way” US drugs agents carried out the attack. He believed it was the work of “professional mercenaries”.

Mr Edmond later told Reuters news agency that the attackers were masquerading as US drug agents when they entered the president’s residence.

Addressing the nation, Mr Joseph vowed the killers would be brought to justice and said the security situation was “under control”.

There has been widespread international condemnation of the assassination. The UN Security Council, which is due to hold a closed-door meeting on the killing on Thursday, issued a statement in which it made “an emphatic call on all political stakeholders in Haiti to refrain from any acts of violence or incitement”.

Who will take control?

Mr Joseph said that “all measures have been taken to ensure continuity” and that “democracy and the republic will win”.

But questions remain about how much control he can assert.

Haiti’s constitution says ministers, under the leadership of the prime minister, take control in the event of presidential vacancy until elections can be called.

But that also remains unclear, as a new prime minister, Ariel Henry, was named by Mr Moïse just this week but has yet to be sworn in.

The US said it believed elections should go ahead this year, to bring about a peaceful transfer of power.

Jovenel Moïse’s time in office was rocky, as he faced accusations of corruption and there were widespread demonstrations in the capital and other cities earlier this year.

Parliamentary elections should have been held in October 2019 but disputes have delayed them, meaning Mr Moïse had been ruling by decree.

In February this year, on the day the opposition wanted him to leave office, Mr Moïse said an attempt to kill him and overthrow the government had been foiled.

Haiti has also faced a wave of gang violence and kidnappings, particularly in the capital, with a number of its districts becoming no-go areas.

The worsening living standards in the nation of 11 million people have pushed nearly 60% below the poverty line.

An earthquake in 2010 killed more than 200,000 people and caused extensive damage to the infrastructure and the economy.

A UN peacekeeping force was put in place in 2004 to help stabilise the country, and only withdrew in 2017, but the turmoil has shown no sign of ending.