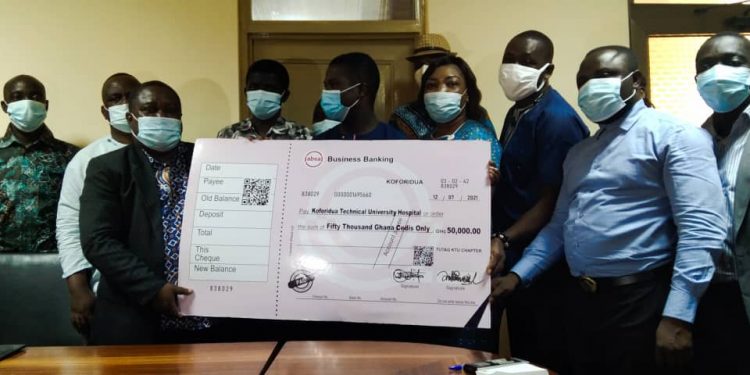 The donation, according to TUTAG, is to enhance health care delivery for students, teaching and non-teaching staff as well as community members in both the New Juaben North and South Municipalities.

In an interview with Citi News after presenting the cheque to management and inspecting the progress of the work which started some months ago, the Chairman of TUTAG, Dr. Anthony Ayarkwah, said TUTAG recognises the need for the institution to have a standard health facility.

“When Professor David Essumang assumed office as the Vice-Chancellor of the university a year and a half ago, he decided to construct a new hospital with the required facilities for the university, and from what we have seen so far after visiting the site which is ongoing, we know and believe this is a worthy cause which needs the support of all and sundry”.

“As a union and stakeholders of the university, this is our widow’s mite, so we decided to come together and contribute money to support the Vice-Chancellor of the university to realize his vision of constructing a standard hospital for the benefit of students and all staff as well as neighbouring communities.”

“When the facility is completed, it will have a male and female ward, consulting rooms, pharmacy, Out-Patient Department (OPD), X-ray unit, VIP wards and dispensary among others”.

The Vice-Chancellor of the University, Professor, David Kofi Essumang, who received the cheque commended TUTAG, and called on other groups to support the construction of the hospital.

“When I came to KTU, I was told that the university has all facilities including a health facility. I was comfortable to come, but when I reported three days after my daughter was not feeling well at around 1:00 am, then I asked where the health facility is located, but I was told there was no hospital on campus, hence my decision to construct a hospital which will fit this great institution”.

“With the exception of the regional hospital which I will say has equipment than us, our hospital will be well-equipped with modern equipment, and I want to use this opportunity to call on non-governmental organizations (NGOs) and other philanthropists to come and support the university, to put up this befitting hospital for the students, faculty, and residents in and around Koforidua”.