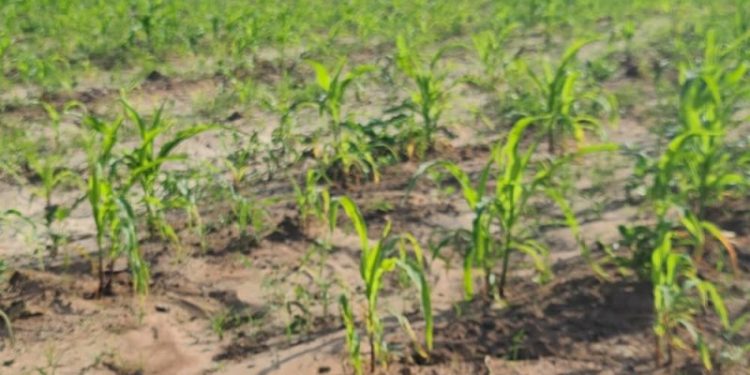 Shortage of fertilizer in the Sissala area is adversely affecting farmers who are struggling to access it, leaving large fields of maize turning yellowish a few weeks after planting.

Some farmers told the Ghana News Agency during a visit to their farms in the Sissala East Municipality and the Sissala West District that the non-availability of the input had forced them to reduce their farm size.

Mr. Batong Iddrisu, a 65-year old farmer from Kupulima in the Sissala West District said the situation had compelled him to reduce his maize farm size from 15 acres to five acres, which he said, would affect his income for the coming years.

Madam Issifu Damata, another farmer at Tumu, said she feared abandoning her 42-acre maize field, which she had already ploughed.

“I only applied fertilizer on seven acres with the rest changing colour whilst others are dying off. I have to stay in a queue for several hours just to get only a small quantity”, Madam Damata explained.

She wants the government to urgently intervene to save the situation as the money already spent on the seeds, ploughing and sowing cannot be recovered.

Madam Lariba Fuseini, a mother of four from Gbarima who cultivated maize to take care of her children, said the “current acute shortage made me reduce my five acres to just two acres and I don’t know what this year will be for me”.

Mr Yussif Osman, a member of the Sissala West District Assembly, said the Sissala area would lose a lot if nothing is done to salvage the situation.

The GNA had observed that some 10 PFJ input dealers in the area had their shops closed.

“It is difficult getting the commodity. So we have resorted to getting some from the open market, which we don’t even get. You have to pay for your order through a middleman which also gets locked up sometimes, it’s really disturbing”, Mr Issifu Sule of Season Plus, has said.

The situation is forcing farmers to queue in the sun to buy the few that come beyond the subsidized price of GH¢96 to GH¢135 or more.

Meanwhile, the assigned fertilizer dealers in the Sissala West District were last week summoned by the Paramount Chief of Gwollu Traditional Area, Kuoro Buktie Liman, over reports of unavailability of fertilizer to farmers.

The dealers of the government-subsidized fertilizer say it was difficult to get some from their parent suppliers in Accra.

On smuggling, the agents said, “other people from different regions of Ghana were using the Sissala border towns to smuggle the commodity into Burkina Faso.”