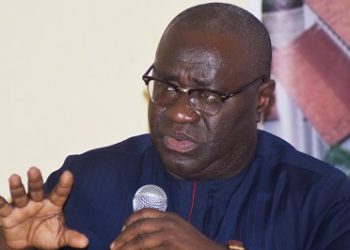 Security Analyst, Professor Kwesi Aning, wants the Ghana Armed Force (GAF) to make public the disciplinary action it will take against its men who unleashed mayhem on some residents of Wa in the Upper West Region.

The incident comes few days after soldiers opened fire on protesters at Ejura in the Ashanti Region, leading to the death of two people and injuries to four others.

Following the incident, GAF in a statement indicated that it has already initiated investigations into the “unprofessional conduct” of the officers.

It also said internal disciplinary measures have been instituted to deal with all those who will be found culpable.

While apologising for the actions of his men, the Chief of Army Staff, Major General Thomas Oppong-Peprah, assured that the soldiers in question will be duly punished.

Commenting on GAF’s response to the incident, Professor Aning, who is also the Director of the Faculty of Academic Affairs and Research at the Kofi Annan International Peace Keeping Training Center, in a Citi News interview said “I think that it should go beyond that.”

He believes GAF will need to do more than just dealing with the issue internally to regain public confidence.

“Yes, first the internal disciplinary procedures must be constituted, and the public informed, and a pathway presented to the public on how these findings can be used to bring about attitudinal and behavioural change. We need to re-establish confidence in the military.”

A similar incident occurred in 2016 in the Northern Region, where a 16-year-old errand boy for some soldiers at the military quarters at Shishegu was beaten to a pulp by two officers over claims that he had stolen a phone.

In a related development, a request by the Minority in Parliament for the Defence and Interior Committee of the house to proceed to Wa in the Upper West Region on a fact-finding mission, following the incident, has been approved by the Speaker.