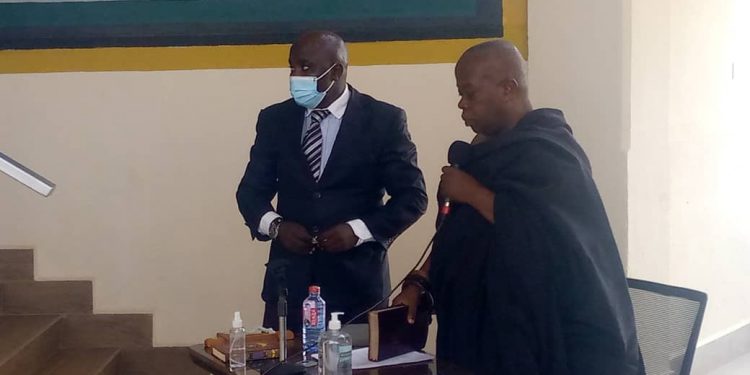 The representative of the Ejura Traditional on the Municipal Security Council for Ejura/Selyedumase, who is also the Nifahene of the traditional area, has handed bullet shells retrieved during the disturbances to the committee probing the matter.

The Nifahene in handing over the shells to the committee said it was handed to the Kontihene of Ejura by a resident of the town during the protest.

“The Chief, in the video, is the Kontihene of Ejura. He was in town when the incident occurred and while there, the youth was attracted to him and the press also wanted to talk to him and in the course of his interview with the media, one of the youth gave him two empty shells and told him that those were shells of bullets fired during the disturbances.”

Nana Osei Kwadwo Ansebie II, who appeared before the committee on Wednesday, July 14, 2021, also recounted how chiefs and other opinion leaders in the area intervened to prevent the disturbances from escalating.

“On the morning of June 28, the Chief of Ejura invited the youth to the palace to speak to them after some disturbances led to the destruction of items in the town in response to Kaaka’s death. Some youth leaders came, and he asked them to allow the police to do their work, since they are the only ones permitted by the law to do so [investigate Kaaka’s death].

When asked whether he thinks that the decision by the police to follow the youth to the cemetery provoked the youth, he said the police were rather being proactive.

“With what happened on June 28, I think the police were being proactive and probably trying to pre-empt some disturbances.”

The three member-committee was thus constituted to commence a public inquiry into the deaths and report to the Presidency.

Meanwhile, three suspects have been remanded into police custody for their alleged roles in the killing of Kaaka.