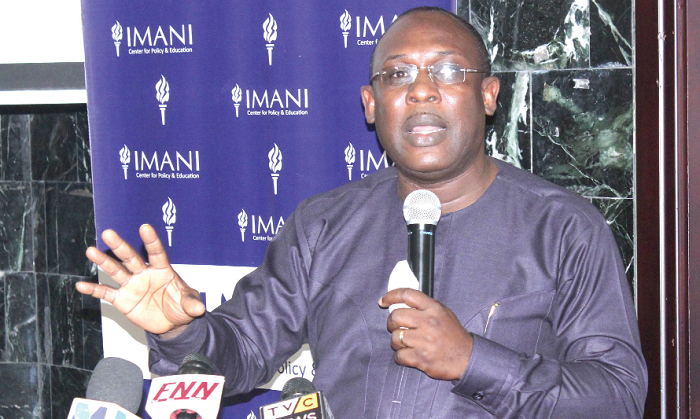 Vice President for IMANI Africa, Kofi Bentil made the claim during a press conference

A Senior Vice President of policy think tank, IMANI Africa, Kofi Bentil has called for the review of Article 71 of the 1992 Constitution.

He believes that section of the constitution is a threat to Ghana’s democracy, hence must be reframed immediately.

“Article 71 is obscene, and it is one of the threats to this democracy, and everybody agrees that it is wrong. I think there is a solution to it and that is all those Article 71 [office holders] can get multiple times the minimum wage. So if the minimum wage is GHS1, we can give them 10,000 times of that. In that way, it will adjust itself automatically as the minimum wage adjusts itself.”

He made the recommendation on Newsfile on Joy FM on the back of uproar over the payment of emolument to spouses of the President and the Vice President following a recommendation by a committee tasked to propose gratuities for Article 71 office holders.

This has led to many Ghanaians expressing displeasure about the move.

The said uproar has compelled the First and Second Ladies to refund the state allowances they have received since January 2017.

a. The speaker and deputy speakers and members of parliament;

b. The chief justice and the justices of the superior court of Judicature;

c. The Auditor-General, the Chairman And Deputy Chairman Of the Electoral Commission,

d. The Commissioner For Human Rights And Administrative Justice And His Deputies And The District Assemblies Common Fund Administrator;

e. the Chairman, Vice Chairman and the other members of,

(i) a National Council for Higher Education, howsoever describes.

2. The salaries and allowances payable, and the facilities available, to the President, the Vice President, the chairman and the other members of the Council of State, Ministers of State and Deputy Ministers, being expenditure charged on the consolidated fund, shall be determined by Parliament on the recommendation of the committee referred to in clause (1) of this article.

3. For the purpose of this article and except as otherwise provided, constitution “salaries” includes allowances, facilities and privilege, and retiring benefit or awards.”