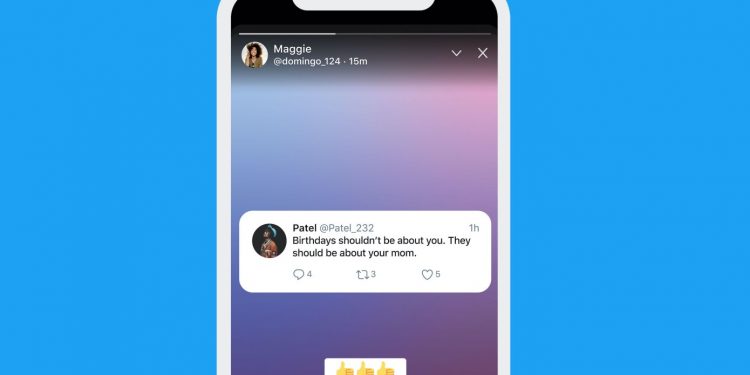 Stories that disappear after a period of time are where the action is on social platforms like Snapchat, Instagram, WhatsApp and Facebook. But when it comes to Twitter, it looks the product itself is going to be going away in a matter of days.

Twitter has confirmed that Fleets — its own take on ephemeral Stories that it launched into general availability just nine months ago — is shutting down on August 3.

The company said the reason for the move is a lack of activity — specifically, among the more hesitant Twitter users who it said it was trying to target with Fleets in the first place. Kayvon Beykpour, Twitter’s head of consumer product, said that the company would be building other products, but didn’t say whether they would be bringing in any more ephemeral aspects to any of them.

Spaces, the company’s answer to Clubhouse, currently sits in the same strip at the top of the app as Fleets and it will become the sole occupant of that horizontal carousel when Fleets disappear.

Meanwhile, the company noted in a blog post from Ilya Brown, VP of Product, that some of what it built for Fleets — such as the vertical, full-screen advertising test that it ran only as recently as June — would possibly reappear in other places on the app.

The announcement shouldn’t come as a surprise, given that the most we’ve heard about Fleets have been when Twitter launched them, or made some kind of product iteration on them, or found itself facing a technical glitch. Yet in terms of viral traction or high-profile Fleets, there hasn’t been much.

Most of all, though, shut-down also underscores how Twitter continues to struggle to make its product accessible in a more mainstream way to a wider pool of users; and how it struggles to boost engagement by tapping users who are there but just to sit back with their popcorn and watch the action.

Back when Twitter first started testing Fleets in limited markets in March 2020, its bet had been that some people weren’t tweeting as much as others because the permanent format of Twitter put them off.

Make the tweets disappear, they thought, and more people would get talking… not least because the format was proving so popular on other social platforms. (Before it made its move last year, Twitter was, indeed, one of the few social media sites that had yet to launch stories format.)

The initial rollout of the feature looked promising — at least if you consider it a positive indicator that Fleets crashed from the surge of people using it when it first became available worldwide.

But longer term, it turns out those quiet Twitter users weren’t much interested in Fleets, either, and that the only people really posting stories as Fleets were already pretty active on the platform.

To be clear, we don’t know how many power users were using Fleets, either. Twitter declined to provide any usage numbers or other stats on Fleets when asked.

There were other issues that Twitter never quite resolve with the user experience of Fleets. For example, was it an issue or confusing at all that when Twitter launched Spaces they appeared in the same place as Fleets? Or was that lack of clarity the writing on the wall for Fleets?

And with Fleets, it was never completely clear how Twitter decided what to put in the space. Some people follow thousands of accounts, and there was never a way to specifically follow people for their Fleets, so what you saw became a question of Twitter’s algorithms.

It seems that Twitter is not closing the door on trying more experiments, even if it’s had a lackluster track record in getting some of them into wider use. “By bets are risky and speculative, so by definition, a number of them won’t work,” Beykpour noted. “If we’re not having to wind down features every once in a while, then it would be a sign that we’re not taking big enough swings.”