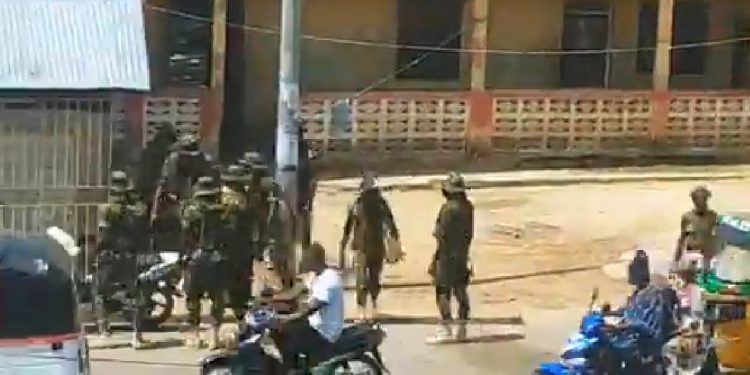 This comes barely a week after soldiers opened fire on protesters at Ejura in the Ashanti Region, leading to the death of two people and injuries to four others.

They recounted how the officers who could not be immediately identified, stopped tricycles and brutalized particularly young men.

The Public Relations Officer of the Upper West Regional Coordinating Council, Cletus Awuni was also beaten by the officers.

“They hit my head about three times and my back, because they used the taser on my hands and my chest,” PRO told Umaru Sanda on Eyewitness News.

In detailing his account of the incident, Mr. Awuni said, “This afternoon I got a call that the military personnel was brutalizing people in town. We saw that they were beating everybody. In the process of inquiring why people were being beaten, I was also beaten.”

“I called the Military Commander to find out what was happening, and he said he didn’t know anything about what they were doing, so the Commander said he wanted to call the 2nd in command. As we were speaking, people were being beaten, so I decided to take a video and send it to the commander, so he sees what the boys are doing. They saw that I was filming them, and they asked why I was filming them. I said I was on a phone call with their commander, then they started beating me up.”

“They demanded that I deleted the video, and I told them I won’t delete it. They started using the taser on me to delete the video.”

“It took the intervention of one police DSP to shout at them that they are beating the PRO of the Upper West Regional Coordinating Council before they stopped beating me… They gave my phone back to me, and I was driven to the hospital by my driver,” he explained.

The video sighted by Citi News saw some residents being forced to lie in open gutters while being beaten.

Another victim, a pupil teacher, said on Eyewitness News that he was accosted in front of his shop in town, forced to lie on the floor, and mercilessly beaten by the officers.

He said they poured hot water on him and continued to beat other persons in the town.

It would be recalled that a similar incident occurred in 2016 in the Northern Region, where a 16-year-old errand boy of some soldiers at the military quarters at Shishegu was beaten to a pulp by two officers.

The officers claimed that the boy had stolen their mobile phone.

The teenager was assaulted by two soldiers, who pointed guns at his head in a bid to get him to confess to stealing the Techno mobile phone.

According to a senior sister of the victim, Patience Bama, the boy went to the military quarters at Shishegu to fetch water with someone’s motorbike when the incident happened. She revealed that the boy, after fetching water, was asked by the soldiers to return after accusing him of stealing the mobile phone.

The soldiers subsequently seized the motorbike and asked him to produce the phone, but when he was unable to do so, he was assaulted.

She said the two soldiers, after beating her brother with sticks, also threatened to shoot him if he did not produce the phone.