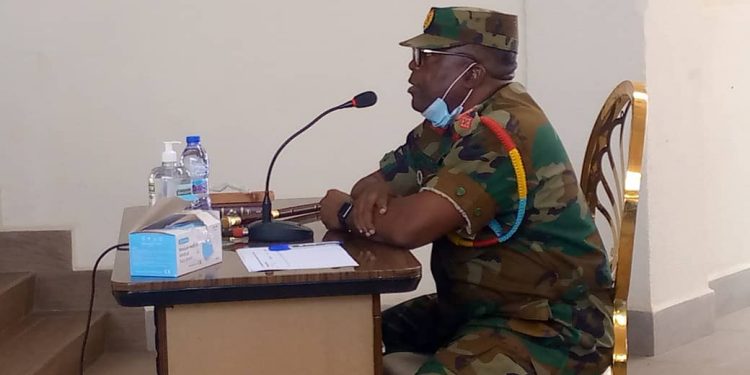 The Ghana Armed Forces (GAF), has said its personnel were compelled to fire into the protesters during the Ejura disturbances after gunshots were fired from among the protesters.

This is the first time such a claim has been made, as initial reports only suggested that the protesters pelted the security personnel with stones and had in their possession knives and machetes.

None of the first two witnesses – the Ashanti Regional Minister and a Multimedia journalist, made mention of the supposed firing of shots from among the protesters. The initial police statement on the disturbances also did not say that shots were fired by some protesters.

According to the General Officer Commanding of the Central Command, Brigadier General Joseph Aphour, who made the claim when he appeared before the ministerial committee probing the incident, said its personnel initially gave verbal warnings to the demonstrators, when they arrived at the scene, but the protesters did not pay heed.

He also claimed that they had arrested two people with weapons and handed them over to the police.

Meanwhile, the Police is yet to update the public on this, as it was not captured in their first statement after the disturbances.

Testifying before the committee based on the briefing given to him by his officers on the field, he added that the warning shots were to scare the protesters, but in the process, some protesters also returned fire.

Brigadier General Joseph Aphour however, added that they fired to maim those who fired at the security personnel on the grounds and not to kill them.

“When we got to the general area of the cemetery, and they [protesters] started issuing warning threats to the police and military team; we started giving verbal warnings which we do in the military, but they didn’t listen. So we fired warning shots, and we realized that some shots were also fired from the crowd, at that stage, it was becoming too bad for civilians to be firing at the security personnel.”

“I think the commander, at that stage, then had to use minimum force by ordering his personnel to begin firing at those who were firing from the crowd to maim them. After our fire, we didn’t have instant deaths. They were evacuated to the hospital, where we later heard two died. But at the instant of our fire, the crowd withdrew and everything came under our control.”

When asked whether the use of live ammunition during the protest was appropriate, he responded in the affirmative.

He claimed the situation could have been worse if they had not taken those steps.

“Of course, when you [security personnel] fire warning shots, and you see people firing from the crowd, certainly you have to use live ammunition to maim them because after, we also arrested two persons with weapons that we have reported to the police.”

Brigadier General Joseph Aphour also backed the Ashanti Regional Minister’s decision to involve the military to calm the situation, insisting more lives could have been lost if that did not happen.

“But if not what for we did together with the police in Ejura I can bet you that there would have been more deaths to civilians than security alive or the chairman of REGSEC didn’t give good judgement and I believe the judgement he gave by inviting us to intervene was the right one.”

Meanwhile, he also opposed suggestions that the military shouldn’t be involved in civilian protests.

The committee should add in their report that the military should be called upon in situations like this. If not, there will be a time that we [Ghana], will be in a serious crisis and the military won’t intervene.”