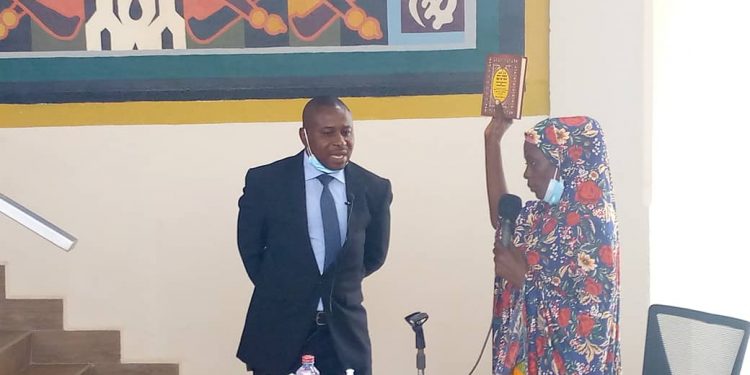 Sahada Hudu, the widow of Ibrahim Muhammed, popularly known as Kaaka, who was killed in Ejura in the Ashanti Region, has suggested that the deceased’s elder brother who has been arrested alongside two suspects is innocent of the crime.

According to her, a neighbour who testified against her brother-in-law, accusing him of being responsible for Kaaka’s death, must be thoroughly investigated.

Sahada Hudu said the woman who cited Kaaka’s elder brother as a suspect in the killing did not personally see him involved in the physical assault that led to her husband’s death.

Testifying before the 3-member committee probing the disturbances in Ejura, she said the committee must thoroughly probe the issue and bring to light the individuals responsible for the death of Kaaka.

Kaaka’s wife repeated her claims that her husband received some threats due to his activism prior to his death. She also confirmed that indeed her late husband was a member of the governing New Patriotic Party, NPP.

She said a month before her husband’s death, he was warned by a young man to stop tarnishing the image of the government.

“There was one of the young men who got up and threatened him that they had been warning him to stop what he has been doing, but he doesn’t want to listen. My husband asked him what he was complaining about, and he told him that all the posts he makes on social media have been tarnishing the image of the party, so they want him to stop.”

“My husband asked him how he knew about his activities on Facebook since he [the young man] doesn’t use a Smartphone. The young man got angry and wanted to fight my husband,” the widow recounted.

She said her husband told her all that ensued immediately he returned from town, and she advised him not to visit that base anymore.

Iddi Mohammed, a brother of the deceased, was arrested a few days after the death as a third suspect.

He is still in police custody, assisting in investigations.

Many believed that the killing of Ibrahim Muhammed was purely political until the arrest of the deceased’s brother.

Kaaka’s death led to a protest by residents during which two people died with four others injured after military personnel allegedly fired shots into the crowd.