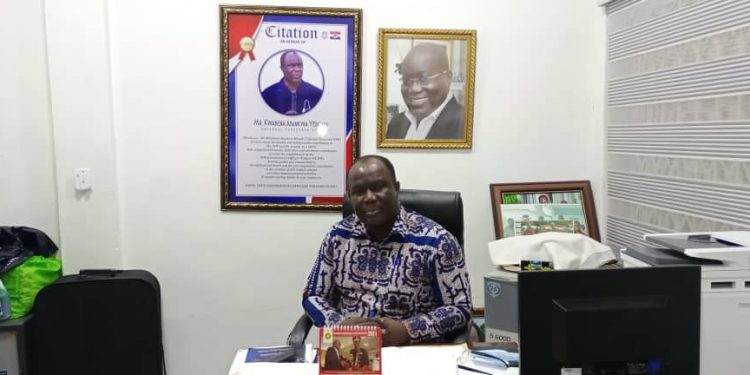 The National Treasurer of the New Patriotic Party (NPP), Kwabena Abankwah-Yeboah has tasked the leaders of the NPP Constituency Officers Welfare (NCOW) to remain transparent and diligent in the discharge of their duties.

According to him, the establishment of a welfare system for the party’s constituency officers across the country was a novelty under the current NPP leadership and called for hard work to sustain the initiative.

Mr. Abankwah-Yeboah made the remarks when the leaders of the NPP Constituency Officers Welfare paid him a surprise visit at the party’s headquarters.

The leadership thanked the party’s treasurer for his role in the establishment of the welfare system, and also expressed their gratitude for his presence during the inauguration of the body at Koforidua in the Eastern Region.

The leadership of NCOW indicated that the welfare scheme has come to stay and promised to put to good use, the contribution of members for the betterment of the party’s Constituency Officers across the country.

Mr. Abankwah-Yeboah on his part commended the executives of NCOW for the foresight in establishing such an initiative and advised the leadership to be transparent in their service to the entire Constituency Officers across the board.

He added that “Being the first crop of executives of this first-ever Welfare Body for Constituency Officers of our great party, I will urge you to put in a lot of sacrifices and work hard not for your own benefit, but for the survival of the initiative, so you can leave a lasting legacy for the NPP.”

He emphasized that the constituencies which represent the grassroots remain the heartbeat of NPP, hence their welfare was important to the leadership of the party in ensuring a strong, loyal and united base ever ready to advance the agenda of the party.

The leadership of the welfare body presented a citation to the National Treasurer in recognition for his outstanding support and contribution towards the establishment of NCOW, his long-standing and indisputable commitment to enhancing the wellbeing of party executives at all levels, and pursuing policies that offer opportunities fairly across the board.