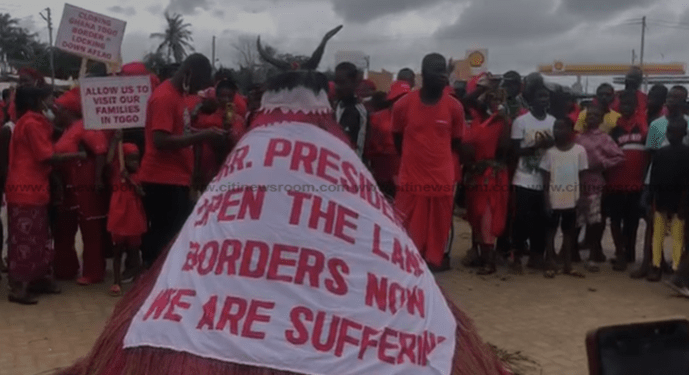 The Municipal Chief Executive (MCE) for Ketu South in the Volta Region, Elliot Edem Agbenorwu says the concerns raised by residents for the reopening of the Aflao border requires a bit of time and consultation for a concrete decision to be made.

He explains that the determination of whether the border should be reopened lies within the mandate of leaders of the West African subregional bloc and not the personal decision of President Nana Akufo-Addo or the Municipal Assembly.

Thousands of residents in the Municipality  on Friday, poured onto the streets to protest and demand the reopening of the Aflao border after months of closure.

The borders were closed as part of measures to fight the COVID-19 pandemic.

They argued that air borders, which were closed together with land borders due to the outbreak of the COVID-19 pandemic, have been reopened, but there are no attempts to replicate same for land borders.

They thus called on government to open the land borders since they play important roles in their economic activities.

But  the MCE maintains that, although the demonstrators had genuine reasons, they ought to exercise restraint and be measured in their expectations.

“Myself as the representative of the President and the Assembly do not have that executive power to reopen the borders. I think it is a discussion that must go further. The demonstrators could not tell if any African country has reopened its land borders.”

“The issue is now bigger than the President or even the country because it takes two countries to open a border. Because if Ghana opens its border and Togo doesn’t open, then we haven’t done anything. So it is a bigger decision that will be taken at the subregional level”, he said on Eyewitness News.

Organizers of the demonstration ended the protest with a petition presented to the Chief Executive of the Ketu South Municipal Assembly.

In their petition, the protestors want “government to [in the interim] provide support for businesses and households at border towns even as they recover from the pandemic and the closure of borders”.

The MCE assured that the petition will be submitted to the Office of the President for the next step to be taken.

“The demonstration happened peacefully and The petition was presented through me which will reach the president in due course for his comment and action.”