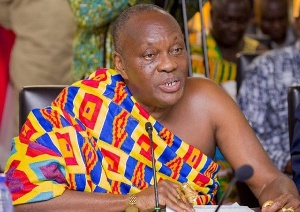 The Council of State has presented its report on a petition to have the Chief Justice impeached to the President.

The Alliance for Social Equity and Public Accountability (ASEPA), had petitioned the President to initiate an impeachment processes against the Chief Justice, following bribery allegations made against him by a Kumasi-based lawyer, Akwasi Afrifa.

The President subsequently referred the petition to the Council of State.

At a meeting at the Jubilee House, Chairman of the Council, Nana Otuo Siribuo II, said the Council has completed its investigation.

“The Council of State has made its findings, and we are here to present to you the findings of the Council of State whether a prima facie case has been made to warrant the start of an impeachment process for the removal of the Chief Justice.”