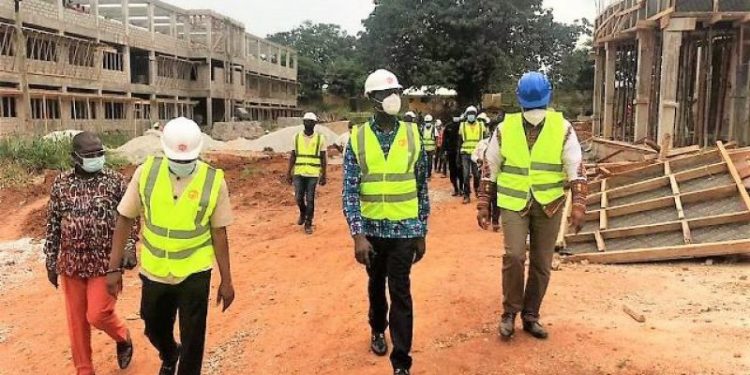 Work on the first phase of Ghana’s first-ever Creative Arts Senior High School (SHS), being constructed at Kwadaso in the Ashanti Region, will be completed in December 2021, Dr. Yaw Osei Adutwum, Minister of Education, has disclosed.

Currently, about 60 percent of the project had been executed by the two main contractors, Messrs Golden Mainland and Uton Engineering, he hinted.

Facilities being worked on included an administration block, a 750-capacity girls’ dormitory as well as a 500-capacity boys’ dormitory, classroom blocks and a studio laboratory.

“The government is committed to diversifying the economy by grooming young talents for the creative arts industry to enhance job creation and poverty alleviation,” Dr. Adutwum told the Ghana News Agency (GNA) at Kwadaso, after he inspected the progress of work on the project.

He was accompanied by Dr. Kingsley Nyarko, Member of Parliament (MP) for Kwadaso, and Mr. Agyenim Boateng, the Municipal Chief Executive (MCE).

Work on the project commenced in 2019, and upon completion, would spearhead the nation’s bid to identify and harness young talents in areas encompassing literature, music, drama, visual arts, film, dance, sound engineering and film production.

Dr. Adutwum said a team of experts had been put together to develop the curriculum for the institution, adding that the operationalization of the nation’s premier Creative Arts SHS was expected to commence soon.

“The vision of the government is very clear. That, in promoting science, technology, engineering and mathematics, we do not have to leave out the creative arts,” he observed.

The creative arts industry, according to the Minister, had many prospects for the younger generation.

Therefore, the government was committed to investing in the sector to brighten the future of the youth.

Dr. Nyarko said the authorities had been monitoring the project to ensure its successful completion.

Mr. Daniel Ohene, Project Coordinator for Messrs Golden Mainland, who guided the delegation for the project inspection, assured of the contractors’ resolve to complete the work as scheduled.

U/West: Work to begin on bridges destroyed by floods next week – Amoako Atta

U/West: Work to begin on bridges destroyed by floods next week - Amoako Atta