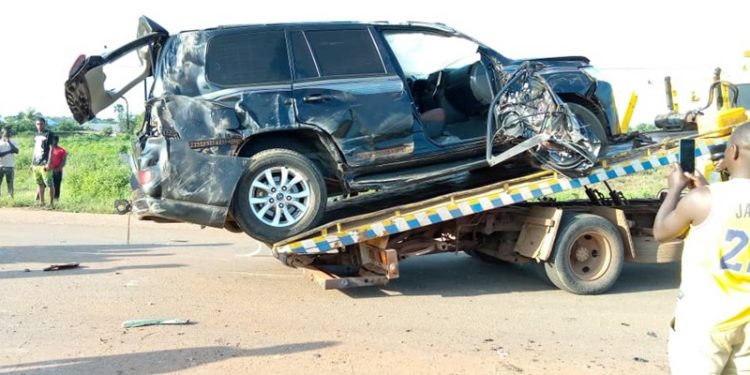 The Minister of Employment and Labour Relations who doubles as the Member of Parliament for Sunyani West in the Bono Region, Ignatius Baffour Awuah has been involved in a road crash.

The crash happened on Saturday afternoon on the Fiapre- Dumasua road after the Minister’s car reportedly collided with a tipper truck.

Information gathered by Citi News suggests that the Minister was in the company of the New Patriotic Party (NPP) Chairman for the Sunyani West Constituency, Kusi Boadum and another person who is yet to be identified when the incident occurred.

The Minister and other occupants of the vehicle have been rushed to the Bono Regional Hospital in Sunyani.

No casualties have been confirmed yet.

Efforts to get NPP party executives in the Sunyani West Constituency to speak on the incident have been unsuccessful.

The unfortunate incident occurred the same day the MP for South Dayi, Rockson Dafeamekpor was also involved in a road crash.

Luckily, the legislator who is also a member of Parliament’s Constitutional, Legal and Parliamentary Affairs Committee escaped unhurt.

The Saturday [August 14, 2021] car crash according to Citi News sources occurred on the Aveyime road in the Volta Region while the MP and some of his colleagues were returning to Accra after attending the funeral ceremony of the father of his colleague parliamentarian, Samuel Okudzeto Ablakwa in the region.

Reports indicate that a KIA truck loaded with concrete blocks ran into the MP’s vehicle, forcing the car to somersault twice.

However, no casualties have been confirmed yet.