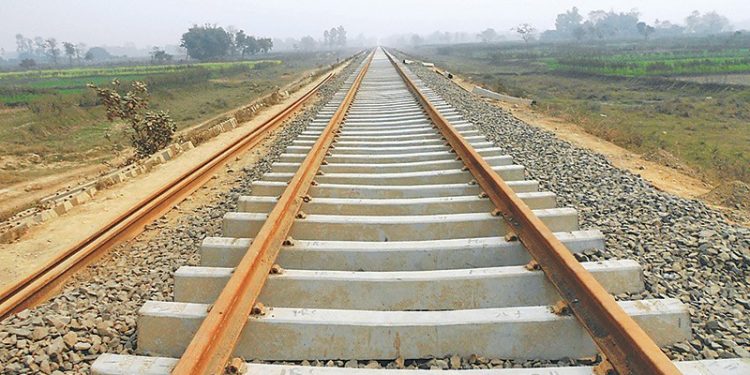 The Ministry of Railway Development has attributed delays in the commencement of the Kumasi to Obuasi Railway line project to encroachment on the lines.

President Nana Akufo-Addo, in September 2020, cut the sod for work to start on the 83.5-kilometre standard gauge railway line as part of the new Western line being constructed.

But the project, which was awarded to David Walter Limited, is yet to commence after more than ten months since its advertised start.

The Deputy Minister for Railways Development, Kwaku Asante Boateng, who spoke to journalists during his tour of the Ashanti Region, said the government was working to resolve the challenges of encroachment.

“People have started encroaching on the rail lines, and you cannot start working without demolishing some of the properties. So, we are confronted with that situation and that is causing a lot of delays. We gave them about three months to evacuate from the right of way, but still, there are people there. The period will elapse in two months, and then we will know how to deal with that issue. But we will, by all means, start the construction. The truth is that we have challenges with encroachment. That is why we have not been able to start”.

Apart from the 15-kilometre narrow-gauge railway line, built between 2012 and 2017, from Sekondi to Takoradi via Kojokrom, no kilometre of the railway line had been added to the Western line.

Cabinet and Parliament both approved a €500 million agreement for the construction of a new standard gauge line from Takoradi Harbour to Kojokrom, and also from Manso to Huni Valley.

President Nana Akufo-Addo explained that the Western line is critical to the successful establishment of the new bauxite and aluminium industry being promoted by the government.

Kwaku Asante Boateng, also expressed concern about the continuous stealing of railway tracks, which is causing the country to lose money.

He said, it costs the nation millions of cedis to construct a kilometre of a rail line, and that the continuous theft of the lines is hampering efforts at reviving the sector.

The Deputy Minister said some suspects are currently before the court, while others have been prosecuted over the theft of the lines.

“We borrowed money from outside to finance some of the projects we are doing. But look at the situation we find ourselves in; this time the stealing is growing. It is a big business, and we suspect that there is a syndicate that has made it a purpose to steal the railway tracks and use the money for their own benefits.”

“All these assets are stolen items that we have been able to retrieve from the public. I want all Ghanaians to be aware of the activities of these thieves so that all of us will be watchdogs in our communities where there are railway lines and report anyone that goes near the asset to the police.”