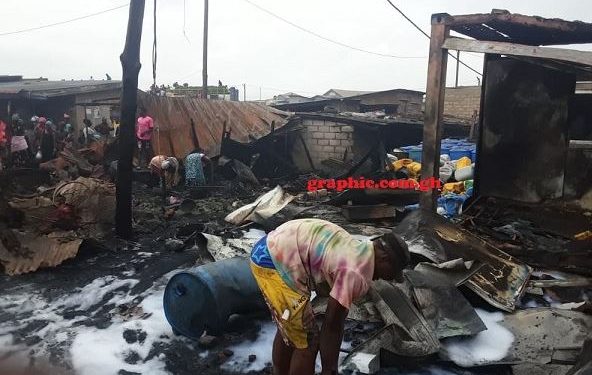 Fire last night gutted scores of wooden structures at the Konkomba Yam Market at Agbogbloshie, in the Greater Accra Region.

The fire, which reportedly started around 12 midnight, razed down a dozen wooden structures, leading to the loss of many properties including yams, drums of alcohol and palm oil, and personal belongings.

Eyewitness accounts said the fire started from one of the wooden structures because of an electrical fault, and initial attempts to douse it failed. 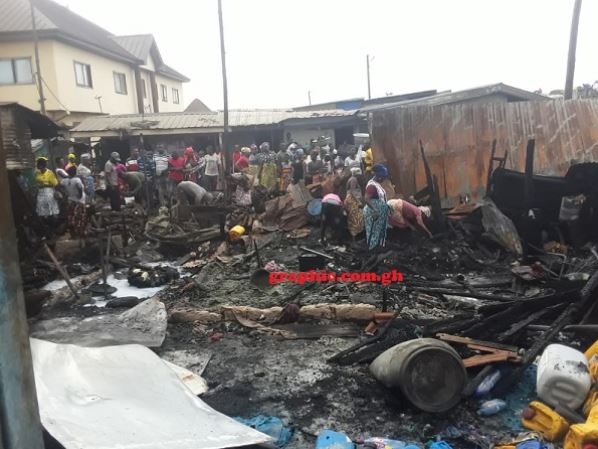 According to the eyewitnesses, it took the intervention of personnel of the Ghana National Fire Service (GNFS) to put out the fire at about 2 am this morning.

“There is a shower operator here; so when the fire started, he was trying to use his water to put it out, but he could not. The Fire Service people brought three fire tenders and were able to fight the fire,” Jacob Ntesen, one of the eyewitnesses, told GraphicOnline.

When GraphicOnline got to the slum community around 7 am this morning, personnel of the GNFS had left the area.

The GNFS could not be reached immediately for comment.

The affected residents were still counting their losses. They were seen trying to remove the burnt yams and other things they could salvage.

Some of the affected persons said they had lost all their fortune to the fire.

One resident, Gloria Wayor, who lost her yams and other properties, said: “I took a loan from the bank to support my trading activities. I have lost all the yams I bought to the fire and I don’t know how I am going to repay the loan”.

The affected residents have appealed to the government to support them.