‘Fixing Ghana is a collective responsibility’ – Chief of Chiraa to Ghanaians 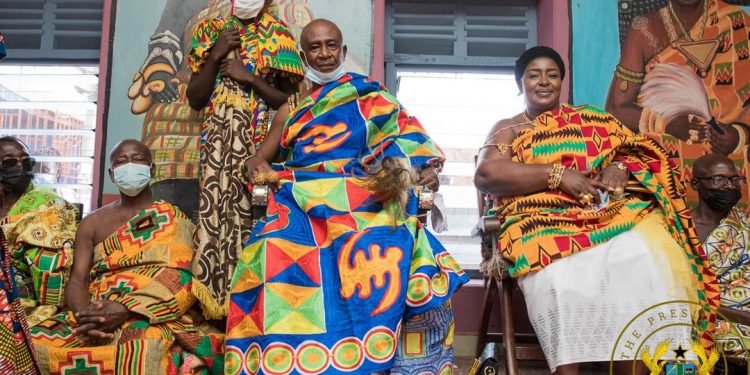 The Chief of the Chiraa Traditional Area in the Sunyani West District of the Bono Region, Nana Afari Mintah, has told Ghanaians that Ghana can only be “fixed” if all citizens come together to play their respective roles.

Nana Afari Mintah expressed these sentiments on Wednesday, 11th August, 2021, when President Akufo-Addo called on him at his palace, as part of his 2-day tour of the Bono Region. 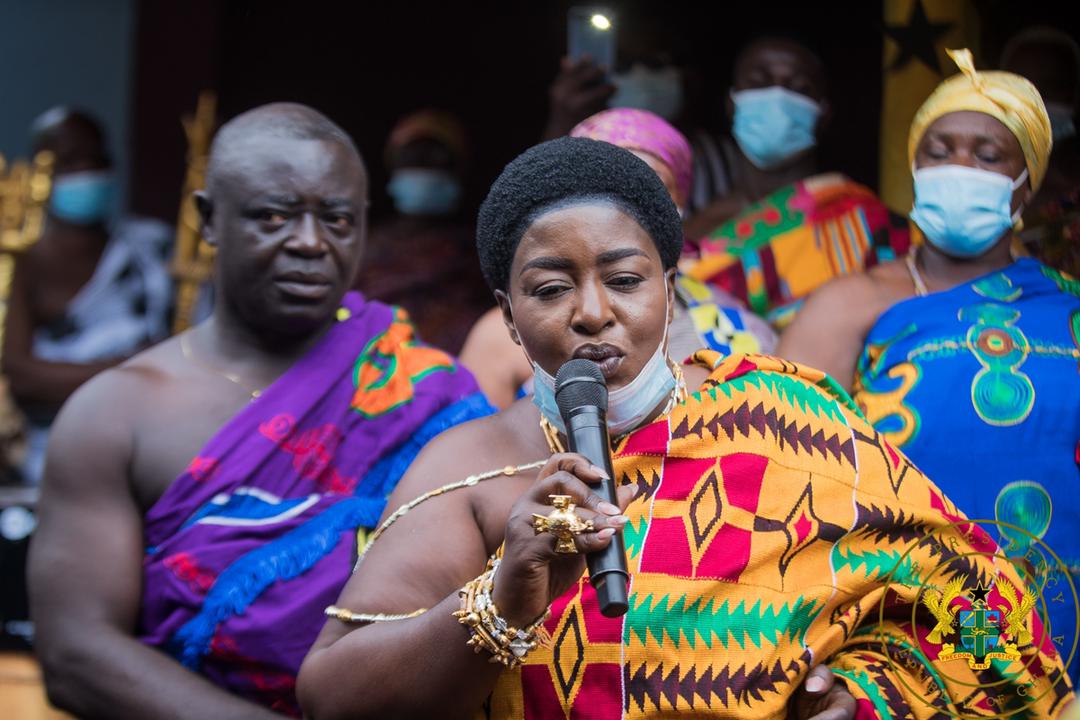 “Nana, not long ago, some young men, who call themselves fix the country advocates, demonstrated. Nana, I and my (queen) mother will help you in fixing the country. Governance is not for a single person or few people to undertake. It is a collective responsibility. It is for all of us to contribute our quota in developing the country. Let us all, in unity, support the President in discharging his vision to develop Ghana,” he said. 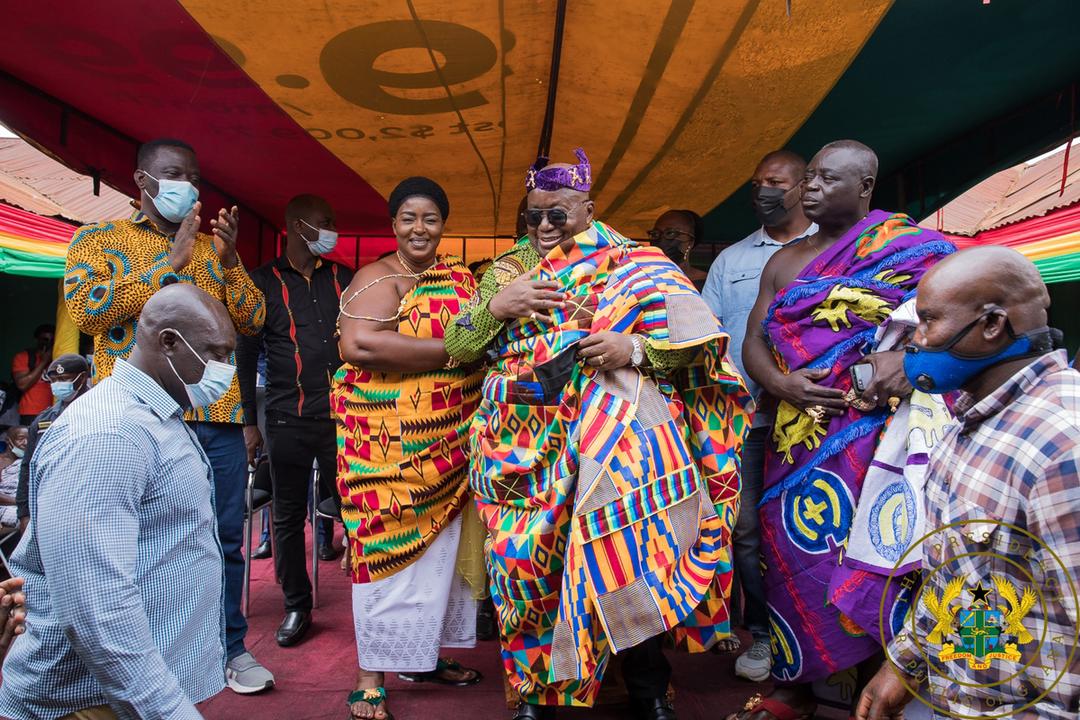 The Chief of Chiraa asked if the country can be fixed with the degradation caused to the country’s forest reserves, as well as the non-payment of taxes.

“Our forest reserves, left for us by our forefathers, forests which belong to the state, you enter them and fell the trees, you degrade them. How do you fix it? Pay taxes, you say I will not pay, you dodge it. Can you fix it?”

He also asked how the country could be fixed or developed “when people go to work at 11.00 am when they are to be there at 9:00 am”. 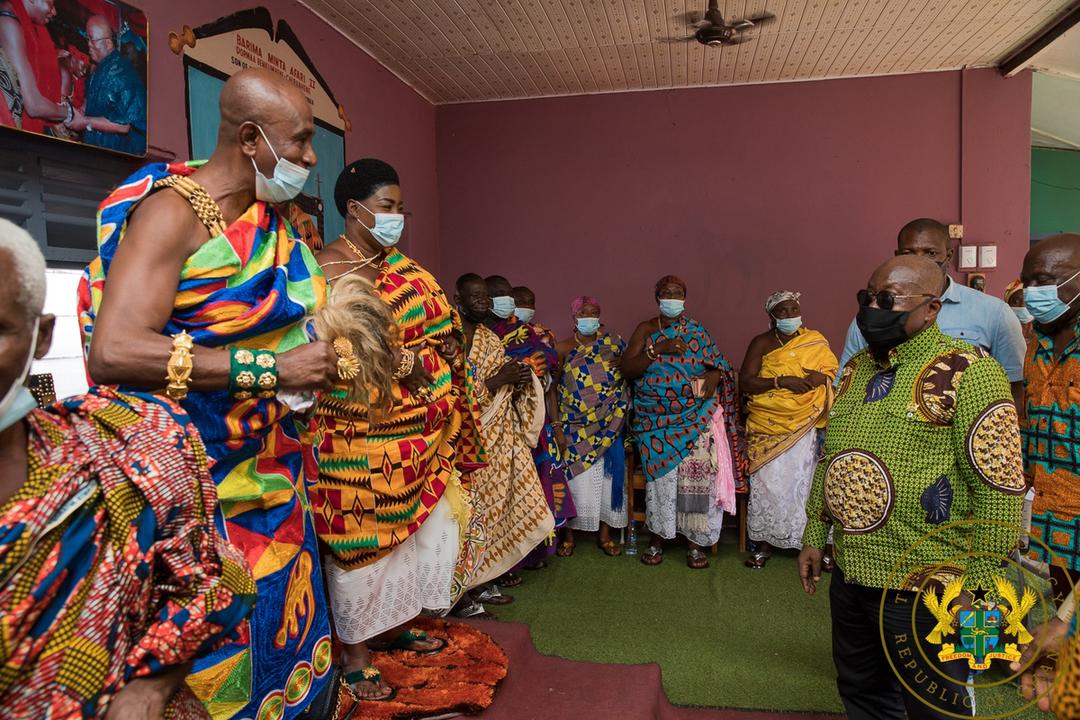 The Chief reiterated that “if we all unite and listen to the President and do what we are supposed to, I know Ghana will develop”.

On roads, Nana Afari Mintah praised President Akufo-Addo for living up to expectations with his year of roads pledge.

“When he talked about the year of roads, it wasn’t a fluke. Today we have seen it ourselves. A road network, which has been unattended to for years, regimes upon regimes have come and gone, but it has never witnessed even an upgrading. Today, we see it being constructed”

On education, Nana Afari Mintah expressed gratitude to President Akufo-Addo for the various infrastructural projects and other interventions for the Chiraa Senior High School.

“In all sincerity, what Nana has done for us, the Chiraa Senior High School, when the students were 2,155, where they would sleep was a challenge. At a point in time, we even considered renting a house for the students to stay in. The MP, Ignatius Baffuor Awuah, told me to exercise patience. As we speak, thanks to you Nana Addo, within a short time, we have three girls’ dormitories. We no longer have any challenges for the girls. The boys also have dormitories. There are also enough classroom blocks, Nana, the people of Chiraa are grateful to you”

Though the Chiraa Secondary School was built in 1982, it was under the tenure of President John Agyekum Kufuor that the school had a bus. The bus, the chief continued, is no more. He, therefore, appealed to President Akufo-Addo to help the school with a bus.

The Chief also asked for an administration block to be constructed for the Chiraa Senior High School, which, he said, has been without one for ages.

The Chief of Chiraa also praised President Akufo-Addo for implementing a pro-poor policy like the Free Senior High School program, Planting for Food and Jobs, and the One District, One Factory initiative.

He used the opportunity to appeal to the President to establish an agro-based factory in the district, since farming is the main occupation of the people.

“Farming is the mainstay of the people of Chiraa, thanks to the Planting for Food and Jobs. We would appreciate it very much if we get a factory here that would process our farming produce into finished and exportable goods,” he said.

Concluding his speech, the Chief of Chiraa expressed confidence in His Excellency Nana Addo Dankwa Akufo-Addo that he would heed his call to give a facelift to Chiraa and its environs.