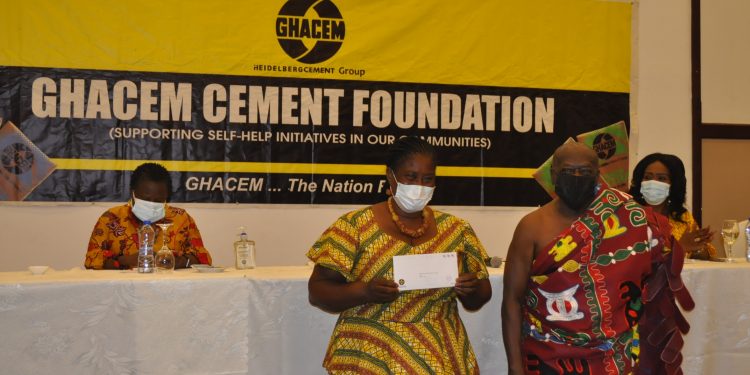 GHACEM Cement Foundation has since its inception in 2002 dished out a total of 600,000 bags of cement to deprived communities across the country, valued at a cost of GHS27 million.

The Foundation is Ghacem’s corporate social responsibility (CSR) arm, which assists deprived communities to improve their health and educational infrastructure.

This year’s southern sector donation ceremony was held in Takoradi at the Best Western Atlantic Hotel on 29th July 2021.

A total of 15,400 bags were donated to selected health and educational institutions captured under the southern sector.

The northern sector will also receive its estimated allocation of free cement bags slated for September 2021.

Ehunabobrim Prah Agyensaim VI, Chairman of the foundation who briefed the gathering on the activities of the foundation, emphasized that Ghacem decided to support education and health in a bid to make a significant impact on Ghana’s infrastructural development.

He implored beneficiaries, past and present, to use the Ghacem superior cement product always as they also contribute to the success of the Ghacem Cement Foundation.

Ehunabobrim Prah Agyensaim VI bemoaned the disheartening experience when Council Members come across images of projects that need genuine help but did not follow the correct mode of application and as such had to be rejected.

He seized the opportunity to reiterate the correct mode of application and appealed to beneficiaries to use the donation for the intended purpose.

Ehunabobrim Prah Agyensaim VI said that two types of application exist which includes: To rehabilitate an existing structure that needs work to be done and for new structures, the community has reached lintel level that needs support.

The procedure includes an original application letter from the Community or Head of the institution (The Chief, Chairman, Town Development Council, Head Teacher/Master, Doctor-in Charge or Medical Assistant/Administration and Head Midwife).

A letter from the District Director of Education or Health.

A Letter from the DCE or any Senior Government Official or Chairman of the Town Development Council or head of religious institution.

Two pictures of existing structures to be rehabilitated to be endorsed by the Director of Education/ Health and add expected completion time for the project after the cement has been donated. Applicants are to apply for one project at a time.

He however cautioned that double application will be cancelled, and the applicant banned for life whereas fraudulent applications will also be banned, and applicants handed over to the police for investigation and prosecution.

In her address, Prof. Audrey Gadzekpo, a Council member for the Foundation, said the council was delighted to see the annual ceremony bounce back after it was called off last year during the heat of the Covid-19 pandemic. “Ghacem cannot talk too much about the adverse effect of the Covid-19, but we take solace in the knowledge that by giving the premium quality cement for infrastructural development, we are contributing in our own way to alleviate some of the hardship experienced in the health and education sectors of the country”.

She appealed to beneficiaries to use the donated cement judiciously and also spread the good news to all other Institutions who will want to benefit provided they qualify.

Mr. Benny Fiifi Ashun, Head of the Ghacem Cement Foundation Secretariat who doubles as the Marketing & PR Manager of Ghacem informed that the foundation is committed to providing more support especially to institutions mostly found in deprived/remote areas of the country “which makes Ghacem a Corporate Entity that stands tall in the socio-economic development of the country,” he touted.

“We will continue to target education and health infrastructure in these deprived areas to support Government’s developmental agenda,” he intimated.