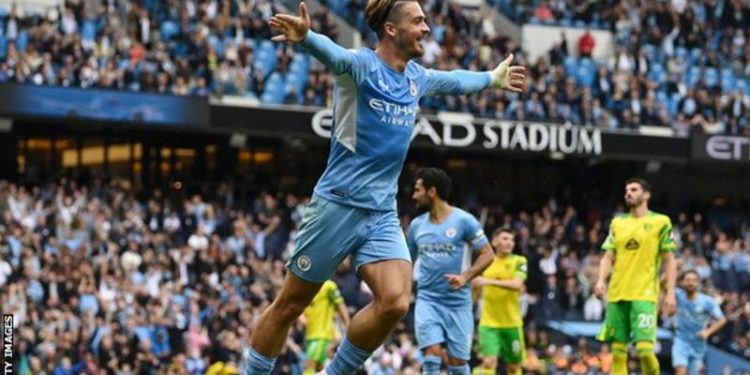 Shaking off three successive defeats bridging this season and last, Pep Guardiola’s side assumed complete control from minute one against the outclassed Canaries.

There was some fortune about their first two goals – both set up by low Gabriel Jesus crosses – as Grant Hanley’s attempted clearance flew in off Norwich keeper Tim Krul before City’s second bounced in off Grealish’s knee.

However, the lead was just reward for the imperious hosts, who saw a neat Ferran Torres finish chalked off in-between those goals after the video assistant referee noticed Bernardo Silva’s clip on Milot Rashica in the build-up.

Aymeric Laporte added the third, steering home a corner from close range, before Jesus capped a impressive and unselfish performance by guiding Kyle Walker’s through ball across the face of the six-yard box for substitute Raheem Sterling to sweep home City’s fourth.

Riyad Mahrez also came off the bench to round off the rout, beating Krul one-on-one to hand Norwich successive 5-0 defeats at Etihad Stadium, having lost there by the same score on their previous visit in July 2020.

England midfielder Grealish ingratiated himself with his new adoring fans thanks to his goal and typically busy display, but it was Jesus who unlocked the Canaries’ cage to ensure this was a stroll.

Used almost as frequently from the bench than as a starter by Guardiola, despite 50 strikes in 132 Premier League appearances, Jesus’ clever movement, control and delivery created three of City’s five goals.

With Grealish on the left and Jesus on the right, Norwich were pulled this way and that for much of the game – and while they defended stoutly for long spells, the pressure was ultimately irresistible.

With Sterling and Mahrez on the bench, and Kevin De Bruyne not risked because of an ankle problem, it was easy to see why Guardiola has insisted he is happy with City’s squad should no further transfer business – most notably the touted signing of Harry Kane – be forthcoming.

Bigger tests, of course, await with Arsenal, Leicester, Chelsea and Liverpool among their next five fixtures – with defeats in the Champions League final, Community Shield and league to Chelsea, Leicester and Tottenham respectively still relatively fresh in the mind.

Norwich had provided one of the all-time Premier League surprises the last time they reached the top flight, beating City – then, as now, reigning champions – 3-2 at Carrow Road two years ago.

But the Canaries were up against it from the opening whistle as City camped in their half before Hanley and Krul unwittingly combined to provide the hosts with the breakthrough.

It was hard luck on Hanley, whose clearance was going out for a corner until it struck Krul who was still stationed at his near post.

That opened the floodgates and the Canaries were limited to just one shot – a late Rashica effort that flew over – as their tough reintroduction to life in the top flight continued after an opening-day defeat by Liverpool.