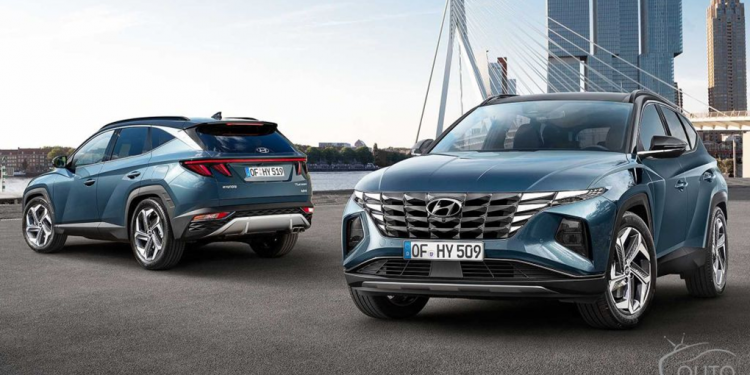 The fourth-generation Hyundai Tucson has undergone what is possibly its most drastic evolution since the original came out in 2004, in terms of both design and technology.

The advanced features peculiar to this new generation Tucson includes long-wheelbase form, the majority of physical controls replaced by touch panels, and the introduction of petrol, diesel and hybrid powertrain, as fuel options.

Senior Sales and Marketing Consultant, Hyundai Ghana, Abdul Razak Mohammed, in a presentation on the vehicle indicated that the all-new Tucson is a ground-up redesign of an existing competent and well-executed vehicle that has helped established Hyundai’s foothold in the SUV segment.

On the outside, the 2021 Hyundai Tucson looks nothing like its predecessor. It follows Hyundai’s Sensuous Sportiness design language, but also features flourishes of what the company calls ‘parametric dynamics’, which adds jewel-like surfacing to the Tucson’s exterior.

It also features a parametric grille that incorporates half-mirror type LED daytime running lights that are only visible when they’re switched on. When the Tucson isn’t running, the DRLs appear to be an extension of the grille surface, with the projector headlights mounted lower in the front bumper.

At the back, the T-shaped tail-lights – linked by an LED light bar that spans the width of the Tucson – also features half-hidden triangular shapes that are only visible when lit. The rear wiper is hidden neatly underneath the spoiler, the bumper sports a diamond-pattern finish, a faux diffuser and twin chrome exhaust tips. All in, the new Tucson has ditched the current-gen model’s rounded, bulky appearance for a design that’s decidedly more aggressive and in-your-face.

On the inside, the 2021 Hyundai Tucson has almost nothing in common with the third-gen SUV, just like the outside. It adopts a minimalist approach and ditches most physical controls for touch panels.

Standing out on the wraparound dashboard are a 10.25-inch digital driver display, a 10.25-inch touchscreen infotainment system and the functions for the automatic climate control system are accessed via a touch panel mounted below the screen.

There are a few physical buttons on the centre console for seat ventilation and other functions, and there is no traditional gear lever – it has been replaced by buttons.

As before, the new Tucson continues to be a 5-seat SUV, and in terms of features, it packs wireless smartphone charging, a panoramic sunroof, air purifier, 64-colour ambient lighting, 360-degree cameras, memory function for the driver’s seat, powered controls for the rear seat passenger to adjust the front passenger’s seat, rear AC vents, a digital key (which lets owners unlock the car with their smartphone), Blue-Link connected car features, voice recognition, a dashcam and a Bose sound system, to name a few.

General Manager and Head of Hyundai, Ganesh Phadale, stated that the starting price for the vehicle is currently, GHS228,000 as showroom price and standard model is GHS186,000.

He described the vehicle as “Love at first sight” when one takes a look at the exterior. In terms of performance, he said: “Whether you are driving on the highway or over a tough terrain, Hyundai Tucson will handle the task with equal ease.”