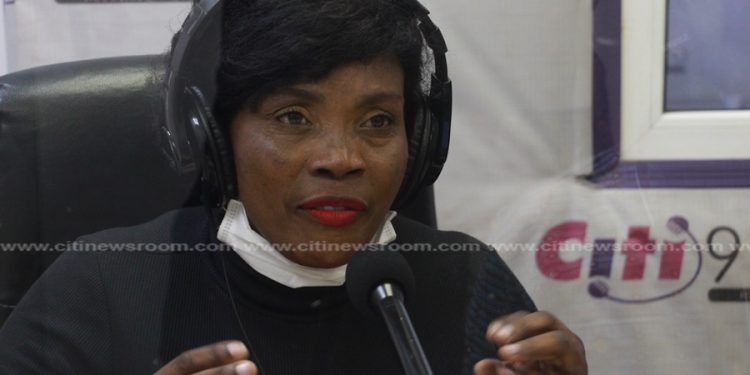 The embattled General Secretary of the People’s National Convention (PNC), Janet Nabila, is threatening to take legal action against members of the party who insist that she has been suspended.

She says the reports that she has been suspended are false, and that she remains the General Secretary of the PNC.

The Chairman of the party, Moses Dani-Baah told Citi News over the weekend that the decision to suspend Madam Nabila was taken at a National Executive Council (NEC) meeting held at the GNAT Hall in Accra.

But speaking on Eyewitness News, Madam Janet Nabila maintained that the National Executive Committee meeting did not form a quorum to be able to take any binding decision, and so she is still at post.

“They couldn’t even form a quorum to sack me. Now, I have a letter circulating of nine of the chairmen supporting me. They say no one should take what [David] Apasera has done seriously. If anyone calls me a suspended General Secretary, I will send the person to court to sue, because a person is supposed to be suspended based on the constitution of the party.”

Janet Nabila said the false information of her supposed suspension is being propagated by the party’s Chairman, Moses Dani Baah, and their 2020 flagbearer, David Apasara who fear that they will be exposed for embezzling the party’s funds.

She claimed that Mr. Apasara and Mr. Dani-Baah were seeking to frustrate her because she took actions that will expose them for taking funds to the tune of GHS70,000 from the party’s coffers without accountability or any justifiable reason.

She said the funds were part of an amount the party raised for the construction of its offices.

“During our 29th anniversary, we solicited funds to build party offices. We got GHS150,000 for the party offices, so we kept it in the account, and we saw that the flagbearer and the leader went to pick as much as GHS70,000 from the account and I didn’t know what they were using the money for. So I went to the regional CID office to report them.”

“I then called auditors to audit the account, and we are calling EOCO to audit the account and give us the findings. I was told that a disciplinary committee was being formed to investigate me.
Apasara and Dani-Baah went around telling people that I have problems in the party. Because they know that they will be disgraced, they want to do something just to cover up their image,” she further stated.

‘AfroWorld’ artiste Broni elated as Memphis jams to his song

'AfroWorld' artiste Broni elated as Memphis jams to his song