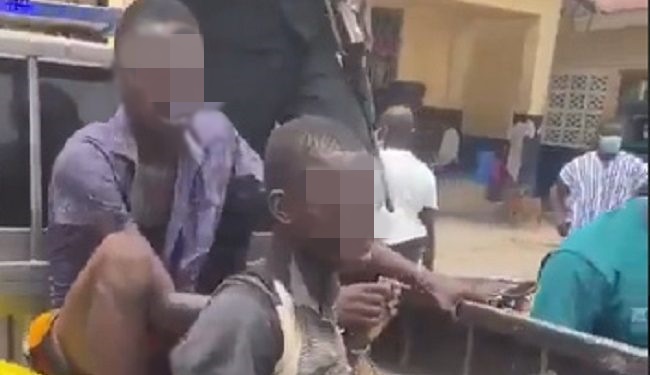 The Kaneshie District Court, presided over by Her Worship Rosemond Douduaa Agyiri on Monday, August 16, 2021, committed the two boys at the centre of what has now become known as the Kasoa ritual killing to trial for murder at the High Court.

But this was not without dramatic startling revelations.

The two, 15-year-old Felix Nyarko and 18-year-old Nicholas Kwame Kani have been charged for the killing of 11-year-old Ishmael Mensah Abdullah on April 2, 2021, at Lamptey Mills, a suburb of Kasoa, for ritual purposes.

They will, per Tuesday’s committal, be standing trial for murder at the High Court.

But, just as Her Worship Agyiri’s Court was about committing the two to a murder trial, 15-year-old Felix Nyarko revealed that they once killed a pregnant woman for ritual purposes.

Without details on that killing, Felix Nyarko told the Court that this was not the first time they had killed.

He told the Court how the ghost of 11-year-old Ishmael has been haunting him and threatening him to speak the truth or be killed.

Nicholas however denied involvement in the killing of the pregnant woman.

The Prosecution led by Nana Adoma Osei filed the Bill of Indictment attached to which were a shovel, a spade, pieces of cement blocks, samples of crime scene soil with blood, and pictures of all the exhibits as part of the material list of evidence attached for prosecution.

Also included was the cautioned statements obtained from the accused persons, a post-mortem examination report and a picture of the deceased.

Felix Nyarko and Nicholas Kwame Kani are to reappear at the High Court on September 20, 2021, for trial.