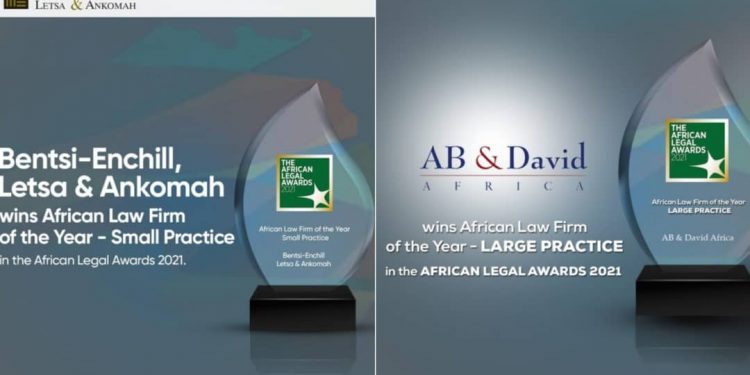 Two prestigious Ghanaian law firms, Bentsi-Enchill, Letsa & Ankomah, and AB & David Africa,  have been recognised at the 2021 edition of ‘The African Legal Awards’.

Bentsi-Enchill, Letsa & Ankomah Chamber beat off competition from 11 other legal firms also on the continent to come tops.

The winner of the category was “consistently at the top of its game’, judges of the award scheme said.

In the case of AB & David Africa, the award organizers said, “The firm demonstrated continued growth, expansion into Africa, the appointment of additional partners, revenue growth, and digitalization”.

Chairman and Senior Partner of the law firm, David Ofosu-Dorte, remarked, “it feels good to win this award at this time of Africa’s growth, especially as it coincides with the implementation of the AfCFTA and the unfolding events of the new decade”.

The award, hosted by Legal Week and the Corporate Counsel Association of South Africa (CCASA), is set out to recognize exceptional achievement from Africa’s legal community.

In all, awards from 38 categories were given at the event.

The African Legal Awards 2021 offer an unrivaled opportunity to promote brands to the industry’s most influential figures.

With this year being the 8th edition, The African Legal Award recognizes exceptional achievement from Africa’s legal elite. The award continues to showcase incredible talent, recognizing more of a pan-African audience each year.

Bentsi-Enchill, Letsa & Ankomah is a leading corporate and commercial law firm in Ghana with broad expertise and experience in providing first-rate legal services for international and local corporations in all sectors of the economy. 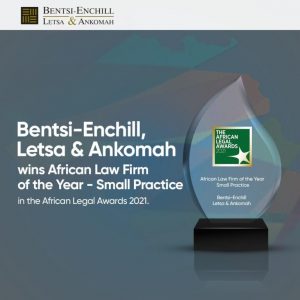 It is also one of the first Ghanaian firms to offer a full service as well as specialized expertise in a number of key practice areas including Business and Industry, Construction, Infrastructure and Transport, Energy and Natural Resources, Financial Institutions and Capital Markets, Litigation and Dispute Resolution, Pensions, Employment and Immigration, Technology, Media and Telecommunications.

AB & David Africa focuses on making sure businesses and projects succeed in Africa. 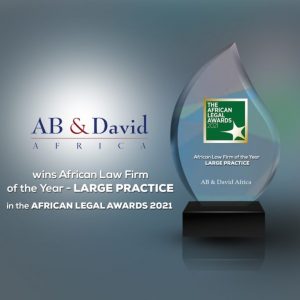 In 2015, AB & David Ghana won the Africa Law Firm of the Year – Small Practice and the CSR, Diversity, Transformation and Economic Empowerment Award.

In addition, the firm was highly commended in the category of the Transportation and Infrastructure Team of the Year.

Again in 2016, the firm won the Africa Law Firm of the Year – Small Practice and was nominated in a number of other categories.

This prestigious 2021 award also follows the recent expansion of the group into Kenya, with Oraro Company Advocates joining the group.

In addition to its six offices, headquartered in Ghana, the firm has a network of firms in 24 African countries and remains committed to its mantra of One Continent, One Law Firm.

AB & David Africa was part of the two Ghanaian law companies that grabbed the latest awards.