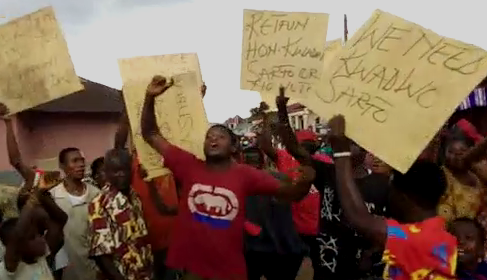 Some supporters of the New Patriotic Party (NPP) in Apedwa are protesting against the nomination of Akosua Asabea Annah as the Municipal Chief Executive (MCE) for Abuakwa South in the Eastern Region.

The supporters, who took to the streets in red bands held placards with inscriptions such as ‘President Nana Addo you have disappointed Apedwa’, ‘We need Hon. Kwadwo Sarfo, Omyehene cannot decide for us’, among others, moved to lock the party office and set ablaze the party’s flag.

Some of the protestors who spoke to the media accused some chiefs and party officials of meddling in the selection process to oust the immediate past MCE Kwadwo Sarfo who was their favorite.

“We will never forget what the Okyenhene did. He meddled with the nomination of MCE for Abuakwa South. President Akufo-Addo has not been fair to us. We will not recognise the Okyenhene as our leader,” a protestor said.

“We have been loyal to the NPP for a long time. The MCE has done no wrong. We were sure the MCE would be retained, but we were disappointed when Asabea was nominated. We know the Chief influenced this decision. We are unhappy with this choice,” another complained.

Supporters of the NPP in parts of the country have embarked on several protests since the President’s nomination of various MMDCEs across the country.

Some protestors have argued that the nominated individuals are unfit for the role.

Some aggrieved supporters of the Tema Central constituency recently locked up the party’s office, demanding that their preferred candidate, Charles Boateng, should have been nominated as MCE.

Some residents who were opposed to the nomination of Zuwera Mada Nashiru as MCE in Chereponi also vandalized property in the district.

Twelve persons have since been arrested in connection with the disturbances.