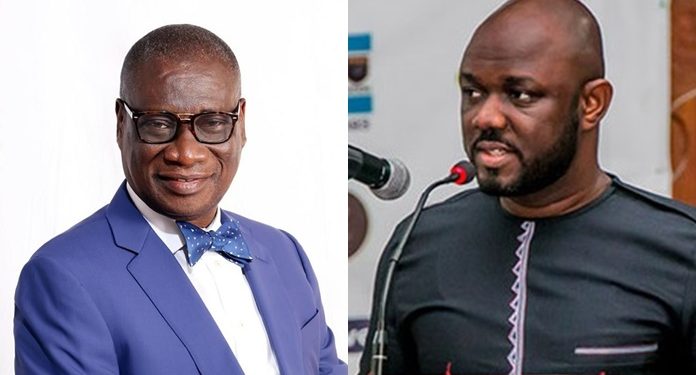 In an open letter, Mr. Boakye says, the GNPC boss’ justification of the much-criticized agreement by attacking civil groups during his media engagements is not only proof that the deal is indeed shady, but also a means to divert attention on how bad the proposed plan is.

He warned that Dr. Sarpong’s escapades and incompetence at the Ghana Cocoa Board (COCOBOD) and Tema Oil Refinery (TOR) raise serious doubts about the successes of the deal being pushed by the GNPC.

“I have followed a series of interviews granted by Dr. KK Sarpong and sometimes froze, literally, in complete disbelief of what damage he is doing to the country in an attempt to litter the media space with hate for CSOs. By design or not, he injects extreme nervousness than I have seen. The strategy was evident; he pontificates his achievements in public life to sedate the minds of Ghanaians to think that he is doing the right thing with the Aker transaction.”

“He tries hard to discredit CSOs in the crudest way possible, so the public will listen to him, not the CSOs. Additionally, he displays an unpardonable lack of control over the Aker transaction, which makes his amnesia of the history of Aker/AGM in Ghana almost forgivable”, Ben Boakye wrote.

Dr.  KK Sarpong in a recent interview on Citi TV‘s current affairs show The Point of View took strong exception to criticisms by civil groups saying the CSOs are badmouthing the oil deal.

He was particularly not happy about the approach of the CSOs because he felt they have resorted to making wild comments other than seeking relevant information on the planned agreement between GNPC and the other partners.

But, the ACEP Executive Director believes Dr. KK Sarpong has rather misconstrued the concerns of the CSOs just to be evasive of the core questions raised against the deal.

“To avoid public scrutiny of the Aker transaction, the Kahuna of GNPC spends time bastardising CSOs and craftily portraying that we lack knowledge of the entire transaction. However, it gets too apparent that if he paid little attention to CSOs, some nervy moments in his interviews, which I will return to shortly, would have been avoided. On the point of lack of knowledge, he got worryingly deflated by Bernard Avle on some specific questions CSOs have raised. His last bullet, though, appears a push for an unfounded twist of imperialist agenda, operated through CSOs, to disrupt what he wants to do with the transaction.”

In the meantime, Ben Boakye has thrown a challenge to the GNPC to shun going around the bush and justify the move beyond reasonable doubts.

“As a civil society, we are happy to remain civil if Dr. Sarpong will choose that route. However, the fundamental questions we have asked remain unanswered. Rather than shadow-boxing, GNPC should come to the public arena to debate the issues. It is time for the section of the Corporation pushing this transaction to realise that the diversionary tactics are crumbling, and the truth is triumphing”, Ben Boakye’s post read in parts.