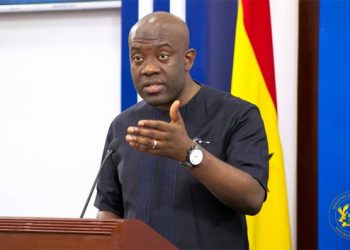 The Minister of Information, Kojo Oppong Nkrumah, has responded to critics of government’s agenda 111 project saying all contracts associated with the project were legally awarded.

Some critics of the project have questioned the credibility of the figures and criterion used in awarding the contracts.

In response to this, the Minister for Information Kojo Oppong Nkrumah in a press briefing on Sunday, September 5, 2021, said, due diligence was done in awarding the contracts.

“We have noticed deliberate politically -motivated claims of impropriety being cooked up against the project. This includes a recent claim by the MP for North Dayi that the project was illegally awarded.”

“Government assures the public that all the contracts associated with the project were legally granted in accordance with approval from the Public Procurement Act.”

The government’s ambitious ‘Agenda 111’ hospital projects is in line with the administration’s commitment to ensuring universal health care to all citizens and the attainment of United Nations’ Sustainable Development Goals.

Each of the hospitals is estimated to cost a little over $16 million.

The President cut sod for the commencement of the project on Tuesday at Trede in the Atwima Kwanwoma District of the Ashanti Region on August 17.

Over 200 contractors will be working on the project which has been allocated GHS 600.

The Literacy Challenge: Top 10 finalists to be announced today