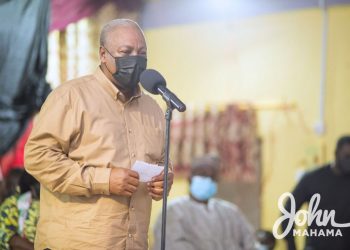 Former President John Dramani Mahama is of the view that government cannot address the unemployment situation in the country on its own.

He says the government will need to collaborate more effectively with the private sector if it wants to solve the problem.

Speaking in an interview with New Mercury FM as part of his ‘Thank You’ Tour of the Ashanti Region, the former President expressed concern about the increasing cases of youth unemployment.

“It’s sad because those employed by the government are about 700,000 out of a population of about 30 million. Where are the remainder supposed to go? Who will employ those left? It will go back to the private sector to do,  and if the government does not support these private businesses they cannot support the government to provide employment for the rest.”

He blamed the government for the high unemployment levels, since in his view, the Akufo-Addo administration has made the environment unfavorable for private businesses to thrive.

He also advised the government against being discriminatory in its dealings with the private sector if it wants to tackle the unemployment problem.

“Companies that do not identify with the government in power, are either crippled or neglected. Our government does not believe in such selectivity. As long as you qualify for the job we believe you should be given the opportunity. Government must make the environment favourable for private businesses.”

“When contractors are not paid, they will lay off drivers, who will, in turn, lay off those they work with. It is a vicious cycle. There is no money in the system because the government is not letting it circulate. These same businesses in the end are required to pay huge taxes. This same government collapsed the banks, that are to support small businesses to expand. These go a long way to cripple these firms, contributing to our struggles of unemployment. Government should know such basic things. It is common sense, governance is not about economic jargons.”

The thousands of youth who showed up at the Youth Employment Agency (YEA)  job fair last week is proof that the lack of employment opportunities for graduates continues to be a huge hurdle for successive administrations.