‘Fake kidnapping’: Woman still in custody as she fails to meet bail conditions 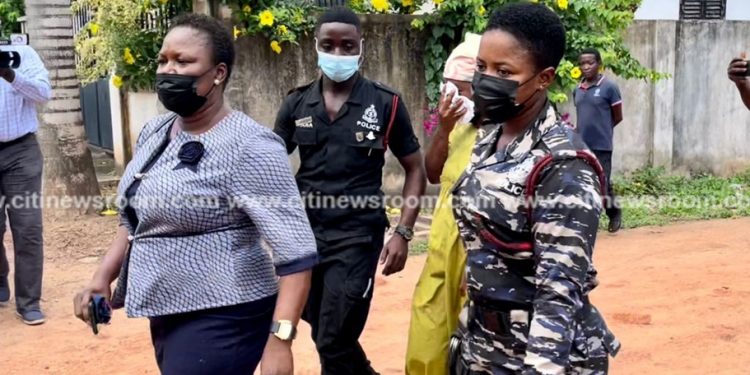 Josephine Panyin Mensah, the woman at the centre of the alleged fake kidnapping and pregnancy case in Takoradi is still in police custody despite been granted bail.

The Takoradi Habour Circuit Court A in the Western Region on Monday, September 27, 2021, granted the accused bail to the tune of GHS50,000 with two sureties.

The court was presided over by His Honour Michael Cudjoe Ampadu.

However, the suspect hasn’t been able to meet the bail conditions and thus still languishing in police custody.

She was charged with deceiving a public officer and causing fear and panic. However, she pleaded not guilty to the charges.

This is in spite of the claims by the police that she had confessed to faking the kidnapping and the pregnancy.

Meanwhile, the Lead counsel for the accused, Philip Fiifi Buckman, said the family is working on meeting the bail conditions.

“I attended to some other cases but from my checks from the police station, the family couldn’t meet the justification today [Monday, September 27, 2021] and I believe tomorrow [September 28, 2021] God willing we should be able to meet the conditions and take her home.”

Meanwhile, the case has been adjourned to be reconvened on October 14, 2021.

About the case so far

The controversial story has for the past week dominated media discussions. News about her alleged disappearance went viral about two weeks ago.

When she was found in Axim, several miles away from Takoradi where she supposedly disappeared, she was mute, unkempt, and without any sign of the said pregnancy.

Claims that she delivered on the same day she was allegedly kidnapped with the baby taken by her supposed kidnappers have been put under scrutiny with the Western Regional Minister, Kwabena Okyere Darko-Mensah stating on Wednesday, September 22 that the said pregnancy was fake.

Further, tests conducted on her at a different facility also confirmed that she was never pregnant, according to the police.

The police have interrogated a number of people in connection with her case.