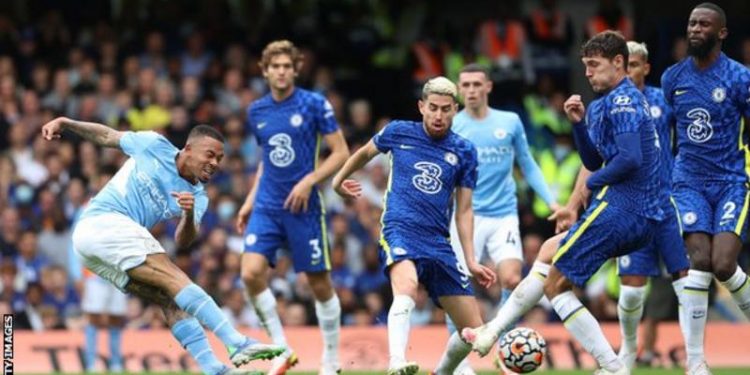 Manchester City produced an impressive display to end Chelsea’s unbeaten start to the season with a deserved victory at Stamford Bridge.

In the meeting between two sides fully expected to fight it out for this season’s Premier League title, the reigning champions dominated against a strangely passive and conservative Chelsea.

Gabriel Jesus settled a tight affair when his 53rd-minute effort took a touch off Jorginho to beat Chelsea keeper Edouard Mendy – but few could question City’s right to win against the team who beat them in last May’s Champions League final, and the victory margin should have been far more emphatic.

Jesus almost added a second when Thiago Silva cleared his effort off the line, while Aymeric Laporte should have scored but somehow slid a shot wide from inside the six-yard box.

It was the perfect start to a crucial week for City and manager Pep Guardiola as they prepare to visit Paris St-Germain in the Champions League this week, then take on Liverpool at Anfield next Sunday.

Manchester City’s start to the season has been mixed in some respects, but this was the champions back to their best and letting one of their main title rivals know they will not give up their crown lightly.

Guardiola’s side were on the front foot from the first whistle as Chelsea seemed reluctant to commit to attack, the only complaint about their first-half supremacy being an inability to create clear opportunities despite their domination of possession.

All that changed after the break and Jesus made the decisive contribution as his shot in a packed penalty area took that vital touch off Jorginho to leave Mendy motionless and beaten.

It was a deserved reward for the Brazilian striker, who took a real buffeting at the hands of Chelsea’s defence, particularly Antonio Rudiger, but took the knocks without complaint and ended up being the match-winner.

Guardiola cut an increasingly agitated figure as the minutes ticked down, presumably because City had failed to finish off Chelsea despite controlling all aspects of the game. The chances came and went, Mendy made saves to keep Chelsea alive, but in the end all was well that ended well for City.

This was a performance with few flaws apart from that lack of ruthlessness, with Laporte and Ruben Dias in total command at the heart of defence, Kevin de Bruyne adding flourishes in midfield and Grealish prompting throughout.

Grealish wears his £100m price tag lightly, playing with freedom and a smile on his face. He could have had two goals – and certainly should have had one when Mendy saved at his feet – and created opportunities for others.

When he was substituted with minutes to go as Guardiola looked to close out the win, he responded to the jeers of Chelsea’s fans with a beaming smile.

This was a job very well done by Grealish – and Manchester City.

As Manchester City took total control, Chelsea’s misery was illustrated by the grim statistic that they did not muster a single shot on target. And this is a fair reflection of their performance.

Thomas Tuchel’s side have looked like a powerhouse this season, even winning games when not playing well as they did against Aston Villa, and earning a point at Anfield despite being down to 10 men for 45 minutes.

This, in contrast, was a dreadful display that spluttered throughout, barely getting out of first gear and rarely giving Manchester City goalkeeper Ederson an anxious moment.

Tuchel has rightly been hailed for his tactical acumen since his arrival at Chelsea, particularly when overcoming this same Manchester City side to win the Champions League in Porto.

Here, however, Tuchel was in furious and frustrated mood from the first whistle as Chelsea failed to lay a glove on City, although his set up of three defensively-minded midfield players in N’Golo Kante, Jorginho and Mateo Kovacic did not help.

Chelsea strike pair of Romelu Lukaku and Timo Werner were cut adrift, although the performances and touch of both strikers disappointed on the rare occasions they were able to get into the game.