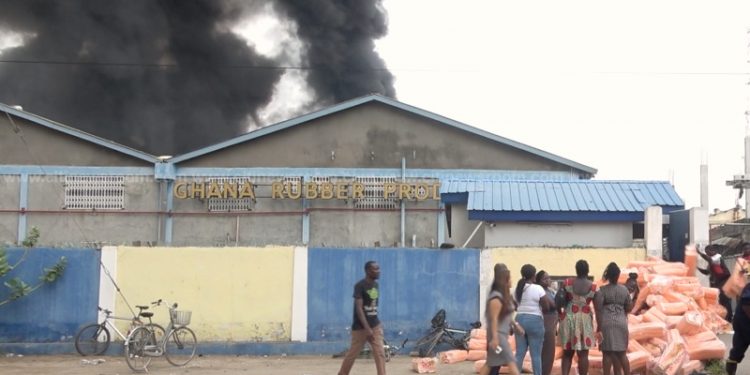 Some workers of the Ghana Rubber Product Limited around the STC Transport Yard in Accra have lamented the impact of a recent fire outbreak that ravaged portions of the company last Friday.

They say the incident will largely affect their livelihoods, especially as the Christmas festivities approach.

The fire, which started around 7:30 am on September 24, affected the storeroom of the company and destroyed materials and equipment used in the production of rubber packs.

In an interaction with Citi News, the workers expressed their worry over the situation, saying they fear the incident will affect their source of income.

“The fire outbreak at our storeroom will really affect us. It is three months to Christmas and as workers, we receive bonuses and goodies as workers in December to celebrate the festivity. With this outbreak, I doubt we will enjoy Christmas since we may not get our bonuses”, one of the affected workers said.

For another, “we have received orders to produce rubber products for our customers, but the fire incident has already destroyed our work for distribution. The fire has destroyed everything we have produced. How do we recover from what we have produced, and how will our bosses pay us if we have nothing to sell?”

Following the inferno, one of the workers sustained minor injuries and was sent to the hospital for medical attention.

“In the course of fighting the fire, part of the roof caved in, and one casualty was recorded,” the Accra Regional Fire Officer, Assistant Chief Fire Officer 1, Alhaji Nuhu Jibril told Citi News.

He however commended the company for the availability of fire hydrants which made it easier to douse the fire and entreated other companies to ensure they have fire hydrants for fire emergency purposes.