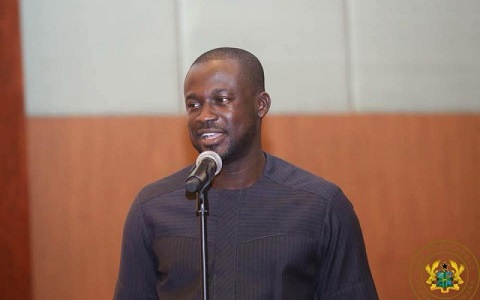 Director of Communications at the presidency, Eugene Arhin, says the Defence Minister, Dominic Nitiwul, has already begun the processes for Ghana to procure the new jet.

President Nana Akufo-Addo has come under fire from the Member of Parliament from North Tongu, Samuel Okudzeto Ablakwa, who has accused him of wasting taxpayer’s money on hiring luxurious jets for his foreign trips instead of using the existing one presidential jet.

The government had explained that the current presidential jet was not convenient for official trips as it couldn’t take more numbers and had limited facilities for the comfort of a president.

Speaking to journalists at the Jubilee House on Monday, September 27, 2021, Eugene Arhin said:

“You would recollect that when the government of President Kufuor left office in 2008, it had procured two jets – the current Falcon and a bigger one, but for one reason or the other, the bigger jet was cancelled, and we were left with just one. That has happened, but you will recall that the Defence Minister stated clearly that the government has decided to buy a bigger jet to save us from all these troubles.”

“I don’t want to go into the details, but I am sure that when the Minister gets the opportunity, he will give further information on what the government is doing in that respect, but I am sure of the fact that government is already in the process of getting a bigger jet for use”, he disclosed.

Mr. Ablakwa sought answers as to why the President allegedly chartered a luxurious jet that cost GH¢3.7 million for his recent trip.

“The President has [again] chartered another flight, which cost us GH¢3.7 million. I am filing two other questions on the latest revelations, and I am hoping that this time, the government’s ministers will not pussyfoot and run away from accountability as they have done all of these months,” Mr. Ablakwa said on Eyewitness News.

The Ranking Member had earlier alleged that the President spent an amount of GH¢2.8 million on his earlier travels to only South Africa and France using the services of a private jet instead of the presidential jet.

The Finance Ministry however avoided the question on the expenditure, and said that information ought to be provided by the National Security Ministry.

But Eugene has at previous press engagements challenged the MP’s claims, describing them as false.

‘Fake kidnapping’: Woman still in custody as she fails to meet bail conditions