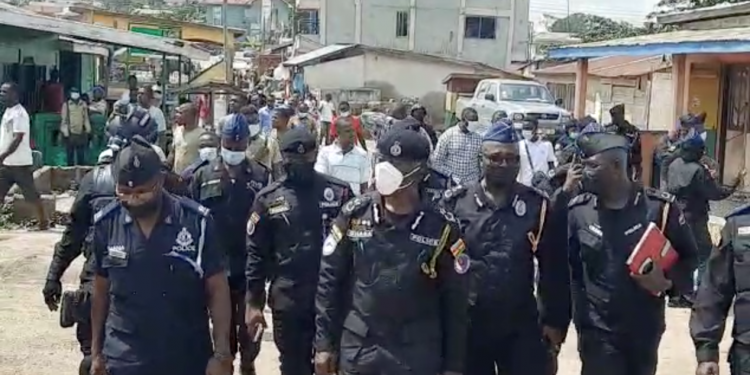 The acting Inspector-General of Police, Dr. George Akuffo Dampare, has presented an undisclosed amount of money to the family of 9-year-old Michael Darko who was killed at Awutu Bereku when the traditional priest of the town was performing rituals to commemorate the Awutu Awubia festival.

Dr. Dampare’s visit to the family of 9-year-old Michael Darko is part of his tour of the newly created Central East Police Command.

The mother of the 9-year-old boy, Hannah Aidoo wants the police to get to the bottom of the matter.

At Gomoa Fetteh Chief’s palace where the acting IGP met with traditional authorities, they reiterated the need for police support during the demolition of the Gomoa Budumburam enclave which is a known haven for criminals.

The suspect in the killing, Henry Opoku, is currently in police custody.

He was reported to be wielding a gun while following the fetish priest who was performing rituals as part of the annual Awubia festival.

The gun however went of mistakenly and killed the 9-year-old, with two others sustaining injuries.

The deceased was celebrating his 9th birthday when he was killed.

The police have since the incident arrested the suspect and restored calm in the community.