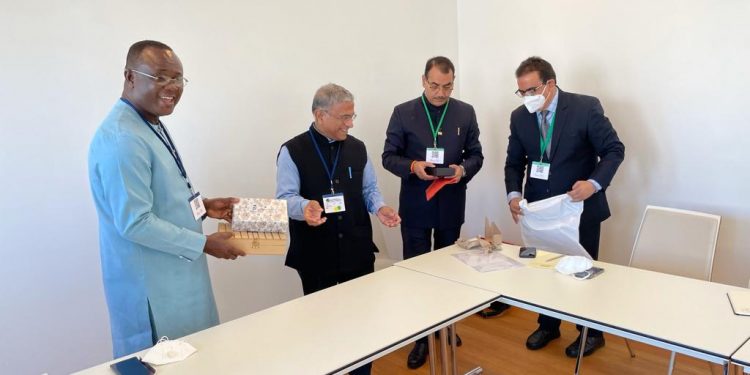 India has asked for Ghana’s support in her bid for the chairmanship of the Commonwealth Parliamentary Association (CPA).

The request was made through Ghana’s First Deputy Speaker of Parliament, Joseph Osei Owusu, in Vienna, Austria, where the Fifth World Conference of Speakers of Parliament was held.

This was during a meeting between the two parliamentary delegations on the sides of the conference.

Mr. Osei Owusu had met with a number of parliamentary delegations from different countries as part of the side events of Ghana’s delegation to the conference, and the delegation from India was one such.

His Excellency Harivansh Narayan Singh, the Deputy Chairman of the Rajya Sabha, which is the Upper House of Indian Parliament, led his team to the meeting with Ghana.

He spoke about the long-standing relations between Ghana and India in the area of capacity building for the civil service as well as the military and suggested that the two countries should consider extending that relationship into other areas.

International parliamentary work is clearly one area in that India will want a partnership with Ghana, hence his request for Ghana to support India’s bid for the chairmanship of the CPA.

He said Ghana was home to a lot of Indians, who are engaged in various businesses and vocations, particularly in Accra and Kumasi. The Jubilee House, which is Ghana’s seat of government, he said, epitomizes the Ghana-Indian relations, given that India built it for Ghana almost as a gift.

Mr. Osei Owusu pledged that Ghana’s Parliament will discuss Indian’s interest in the CPA chairmanship and determine how the two countries can continue to collaborate within the CPA.

Mr. Cyril Nsiah, the Clerk to Parliament, who was a member of Ghana’s delegation to the conference in Vienna, said Ghana’s Parliament had benefited immensely from capacity building from the Indian Government.

At the onset of Ghana’s Fourth Republic, most of the training and re-training of the staff of the Parliamentary Service was done with the support of India. He looked forward to more collaboration with India in other areas.

H.E. Harivansh was accompanied by Mr. R. Tiwari, a Joint Secretary at the Rajya Sabha, Mr. Gjanveer Singh, First Secretary at the Indian Embassy in Vienna, and L. V. Ramana, a Senior Official of Indian’s Parliament.

The Ghanaian parliamentary delegation, which has since returned home, had earlier met with delegations from Zimbabwe and Hungary.