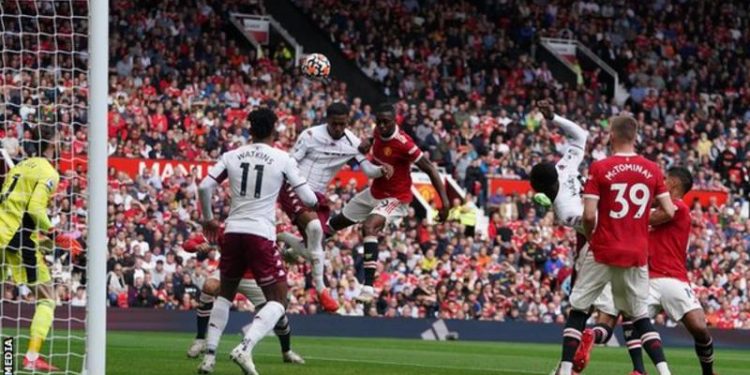 Bruno Fernandes missed a 93rd-minute penalty as Aston Villa won at Old Trafford for the first time in 12 years in a pulsating match.

Kortney Hause had put Villa ahead with a powerful header two minutes from the end of normal time before the defender handled inside the box to present United with a lifeline.

However, Fernandes blazed over high over the bar in front of the Stretford End as United’s unbeaten start to the Premier League season came to an end.

Having suffered an early Carabao Cup exit at home to West Ham, United have lost their past two games without scoring.

After Matt Targett blazed over inside the six-yard area, Ollie Watkins could only fire at David de Gea after the United keeper had passed straight to the Villa forward following Harry Maguire’s backpass.

In a thrilling game, Ezri Konsa also headed another chance over after beating Aaron Wan-Bissaka in the air, while Watkins was denied by De Gea at full stretch in the second half.

At the other end, Emiliano Martinez kept out Maguire’s header and Paul Pogba nodded wide when the France midfielder should have scored.

The Red Devils boss thought his side was denied “two stonewall penalties” in a 2-1 win at West Ham last Sunday, while he also felt they should have had a spot-kick in the Carabao Cup defeat by the Hammers on Wednesday.

Fernandes, however, ballooned his attempt high over Martinez’s crossbar leaving Villa to celebrate a famous win.

It capped a bitterly frustrating day for United.

They had 28 shots yet failed to find the net. It was also the first time Cristiano Ronaldo failed to score since re-signing.

Suddenly, United and Solskjaer find themselves under pressure before Villarreal’s Champions League visit to Old Trafford on Wednesday.

Solskjaer is expected to deliver trophies this season after a busy – and expensive – summer in the transfer market.

With one avenue closed in the EFL Cup, they need to bounce back and beat Villarreal after losing their first group game against Young Boys

Villa arrived at Old Trafford seeking a first point on the road in the Premier League. They left celebrating a memorable victory after a highly impressive performance.

Not since Gabriel Agbonlahor scored the winner in 2009 have Villa won at Old Trafford but Dean Smith’s side reveled in their surroundings as they carved out several clear-cut chances.

Targett will wonder how on earth he missed from close range after a lovely move involving John McGinn and Matty Cash.

With England boss Gareth Southgate watching from the directors’ box, Watkins will feel he should have done better after De Gea’s mistake before the United keeper denied Villa’s number 11 after half-time with a diving stop.

Villa secured nine away wins on their way to finishing a respectable 11th last season.

After back-to-back defeats on their travels, they are up and running on the road after a powerful headed finish by Hause, making his first league start of the season in place of Axel Tuanzebe, who was not eligible to face his parent club.