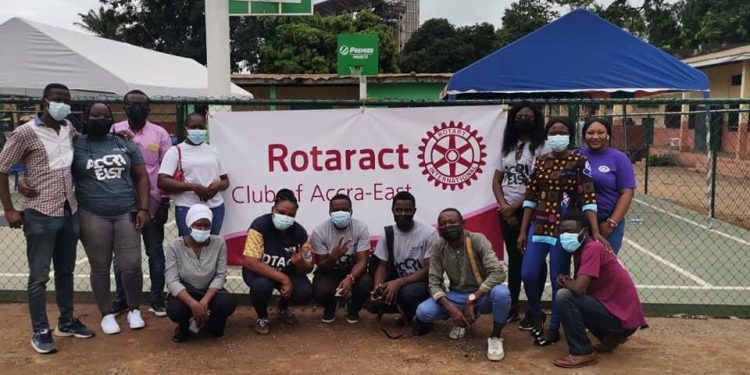 The exercise, which was in collaboration with the Rotary Club of Accra Legon East, Men’s Health Foundation, and Psychaid Love and Outreach, followed a needs assessment conducted by the club in May 2021, which revealed that students, staff, and members of the Ghana Federation of Persons with Disabilities, were in need of health support.

Speaking at the event over the weekend, the President of the Club, Ohenewaa Brown, indicated that the project was in line with the club’s three-year strategic plan and in response to one of Rotary International’s area of focus on Disease Prevention and Treatment.

According to Ms. Brown, available research on prostate cancer incidences by Men’s Health Foundation revealed that Ghana has a high mortality rate, stressing that the project was a manifestation of the club’s continuous determination to dedicate resources and time to improve the quality of life and healthcare of the marginalized in society.

Touching on why mental health was featured, she said, “several research reports have revealed that Persons with Disabilities face discrimination and stigma when they access healthcare. Such situations have the potential of affecting their mental health. Again, the COVID-19 pandemic is putting undue mental pressure on everyone around the world, and it’s time we all put our mental health first”.

Lucky Bittor, Founder, Psychaid Love, and Outreach, noted that as humans it is normal to go through physical and mental stress, however, most people prioritize their physical health as compared to their mental health.

Ms. Bittor further noted that although stakeholders in the health sector, especially Non-Governmental Organizations with a focus on mental health, are working assiduously to enhance mental health awareness creation efforts, the associated stigma and lack of knowledge on the subject is threatening the gains made.

Afriyie Ofori-Koree, President, Rotary Club of Accra Legon East, who led the partners to donate some items including handwashing soap and sanitizers, face masks, and groceries, said the club’s participation in the project was to exhibit their commitment to serve the community.

William Ohene-Ayeh, Housemaster, Accra Rehabilitation Centre, who received the items on behalf of staff and students, commended the partners for the care and love exhibited during the project and assured the team that all items will be put to good use.