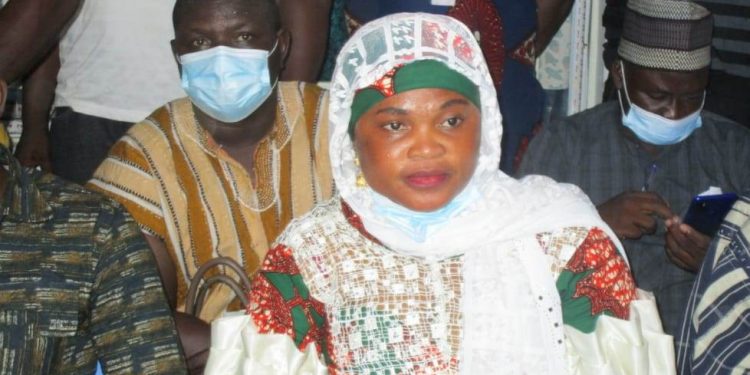 The District Chief Executive nominee for Sawla-Tuna-Kalba District, Barikisu Losina, is calling for unity and support for her administration.

She made the call following protest by some youth of the party against her nomination ahead of an election for her approval or otherwise.

Following a press conference by some NPP youth in the Sawla-Tuna-Kalba Constituency against her prior to being nominated by the President, Losina Barikisu made what could be described as a triumphant entry into Sawla.

Party sympathisers and well-wishers poured onto the streets of Sawla to welcome her to begin the journey to her confirmation as District Chief Executive.

Barikisu Losina is one of the 38 women nominated by President Akufo-Addo to be confirmed as chief executives for various assemblies in the country. She’s the first woman to be nominated as DCE for Sawla-Tuna-Kalba since its creation in 2004.

Her nomination was therefore met with joy when she visited Sawla to pay a courtesy call on the chiefs and elders of the district to seek their support.

She also interacted with party supporters at the constituency party office, where she called for unity and the support of all.

Speaking to the media, Losina Barikisu expressed gratitude to the president for nominating her.

“I, first, want to thank Allah for his grace and blessings, and I thank the President, Nana Akufo-Addo for appointing me to serve in his government. I know he saw the capabilities in me, and also the fact that he’s committed to giving women the opportunity to serve is the reason he has appointed me.”

She repeated her call to her colleagues who contested for the DCE position as well as assembly members to support her to deliver on her mandate.

“To my colleagues who contested with me, I need their support, they are here to support me, and I am happy. I can’t develop STK alone, I need them, I need the assembly members, I need our chiefs and everyone to come together and support, so we all put our heads and minds together to develop this district.”

Banasco Seidu Nuhu, the NPP Parliamentary Candidate for the constituency in the 2020 elections who also contested for the office of the DCE, told Citi News that he is committed to supporting Barikisu Losina’s administration.

“I have already been a very good team player, if I had been nominated I would have called on her, and as she has called on me. I am excited, and I will put in my efforts, and together I believe we can forge synergies together because the important thing is to grow the party and make the area better than we met.”