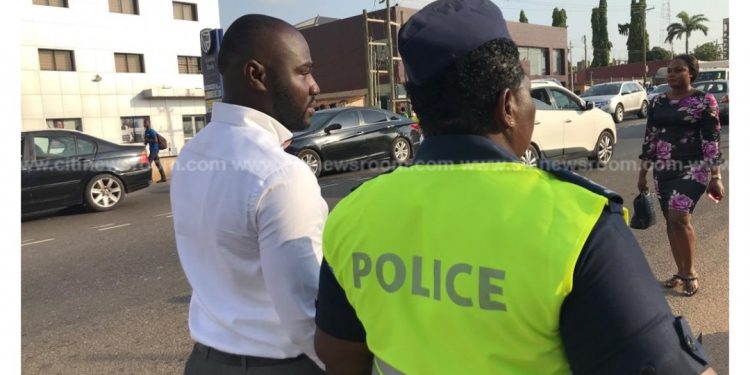 Several security officers and other drivers have been arrested by the police MTTD for disregarding traffic regulations.

The exercise, which was carried out on the Gbetsile junction on the Tema-Afienya road, apprehended drivers for driving against traffic, failing to display car number plates, and wrongful overtaking.

The drivers numbering about 15 comprised both commercial and private cars users.  Most of them cited lateness to work as the reason for their misconduct.

Speaking after the exercise, the Director of Operations at the Police MTTD, Superintendent Dr. Sasu Mensah, was impressed the exercise had helped ease the traffic congestion on the route.

“It is not the number of vehicles that we arrest that will determine our success. What we intend to do is to reduce traffic congestion and that is what we have absolutely done, and people are now following traffic rules and there is some level of sanity and discipline. At least 15 drivers have been arrested, and today they are going to court.”

Recently, some drivers who were arrested under the campaign were made to hold placards with the inscription; ‘I WILL NOT DRIVE CARELESSLY AGAIN’ for a week as punishment.

That was in addition to a fine the court charged them.