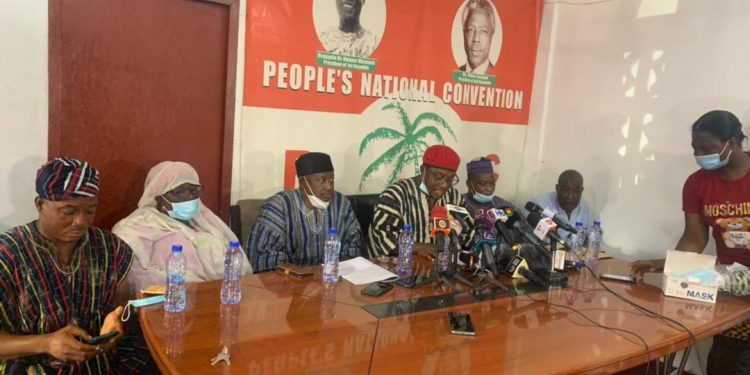 Some disgruntled leaders of the troubled People’s National Convention (PNC) say they will use legal means to restrain any of its suspended members should they decide to officially partake in activities of the party.

They in particular said they don’t mind causing the ‘arrest’ of their National Chairman, Moses Dani Baah, whom they, on their own, suspended on Tuesday, September 7, 2021, if he attempts to be involved in party issues.

Cracks in the PNC have worsened following the suspension of the party’s General Secretary, Janet Nabla, by the party’s National Executive Committee (NEC) on August 28, 2021, over allegations of gross misconduct, insubordination, and incompetence.

She has vehemently rejected the indefinite suspension.

On Tuesday, another group, comprising some regional chairmen of the party, claimed they are part of the PNC’s NEC and took a decision to also remove the party’s leader, David Apasera, and its National Chairman, Moses Dani Baah.

They also announced the reinstatement of Nabla.

Meanwhile, a separate statement signed by Moses Dani Baah, National Chairman of the PNC, insisted that Nabla remains suspended and asked Ghanaians to ignore the decision announced by the disgruntled leaders of the party.

“The PNC wishes to state unequivocally that its former General Secretary, Ms. Janet Asana Nabla is still under an indefinite suspension following the National Executive Committee Meeting of 28th August 2021 held at the GNAT Hall in Accra.”

Stay away from affairs of the party

But speaking on Eyewitness News, Ashanti Regional Secretary of the PNC, Seidu Suleiman said, it will be in the interest of Mr. Dani Baah to stay away from party affairs going forward.

“He will surely be restrained by the laws of the party. Where necessary, there could be citizen’s arrest. He is a persona non grata and cannot hold himself as Chairman of the party”.

Janet Nabla had alleged that Mr. Dani Baah and Mr. Apasara embezzled funds to the tune of GHS70,000 from the party’s coffers.