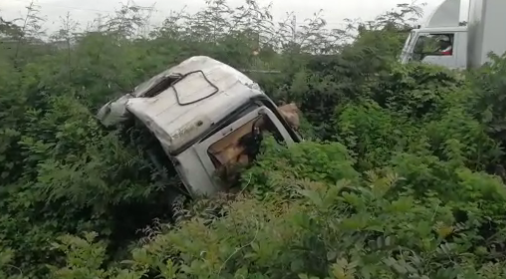 A driver of a trailer with registration number GN 3161-09, is feared dead after he skidded off the road into a ditch on the Tema Motorway.

The driver’s mate is said to be battling for his life at the Tema General Hospital.

The accident reportedly occurred around  10:00 pm on Friday.

The trailer, which was carrying crates of empty beer bottles, landed in a major storm drain near the Adjei Kojo underpass on the motorway.

The Tema Motorway is notorious for road accidents almost on a weekly basis. Many have blamed these accidents on the deteriorated nature of the road, whereas others have blamed it on reckless driving.

This was disclosed by Mrs. May Obiri Yeboah, the Director-General of the National Road Safety Authority (NRSA).