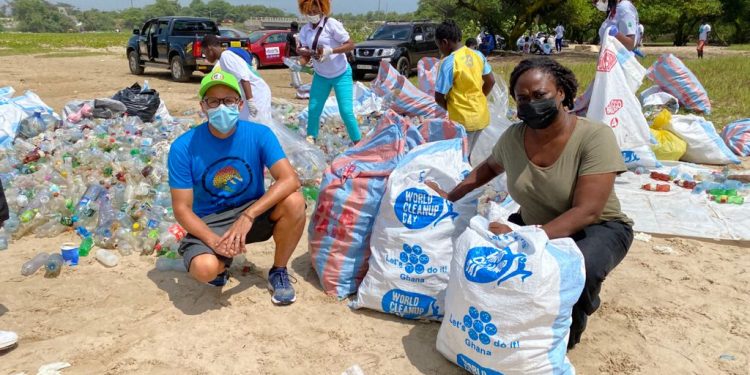 The Australia High Commissioner to Ghana, Gregory Andrews, in the early hours of Saturday, September 18, 2021, joined a group of volunteers to clean up the Laboma beach in Accra to mark World Clean-up Day.

He said “we can all make a contribution to reducing plastic pollution and dispose waste responsibly”.

World Clean-up Day, which is marked every year in September, is to create awareness of the invaluable impact of a clean planet to human life.

It is usually marked by over 11 million people in over 180 countries across the globe.

The theme for this year is “people for a clean environment” which is inspired by “Let’s Do It World”.

70 percent of the world’s oxygen is produced in the ocean,  but 8 million tons of plastics end up in water bodies each year. This is causing drastic climate change to the planet.

The country representative of ‘Let’s do it World’ in Ghana, Kate Opoku, in a phone interview said “despite the need for government to ban single use plastics, it’s time to revisit the past where beverage production companies use bottles instead of plastic”.

She said the clean-up exercise won’t solve the pollution immediately when peoples’ attitude towards the environment doesn’t change.

Gregory reiterated that, “a clean environment is good for the economy, good for human health and good for the planet which sustains us. I joined world cleanup day today because wherever I am in the world, like many Australians and Ghanaians, I like to volunteer for a cleaner environment” he said.

According to him, the government has some good policies in place like “making Accra the cleanest city in Africa” among others.

“My wife Rachael and I also like to make a personal contribution as members of the local community”.

The clean-up was done in five different locations in Accra and in other coastal towns across the country.