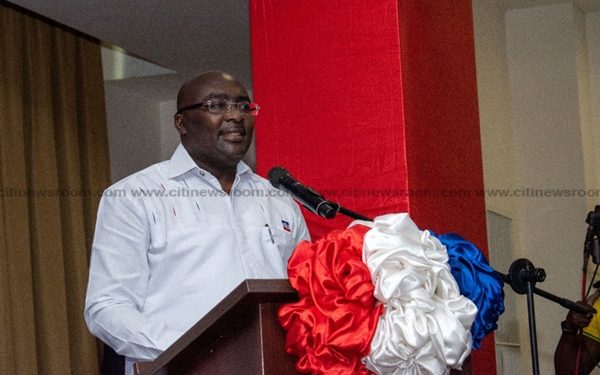 The governing New Patriotic Party (NPP) has extended its commiserations to the Vice President, Dr. Mahamudu Bawumia over the demise of his mother, Hajia Mariama Bawumia.

In a statement, the party also expressed sympathies to the bereaved family and the people of Walewale and further described the death as a “great loss” to the NPP.

“The NPP has received with shock and sadness, news of the passing of Hajia Mariama Bawumia, the mother of His Excellency Alhaji Dr. Mahamudu Bawumia, the Vice President of the Republic.”

“The party accordingly extends its deep sympathies to His Excellency the Vice President and the bereaved family as well as the good people of Walewale for this great loss”, the NPP said.

Describing Hajia Mariama Bawumia as a ‘motherly figure and a great source of inspiration, the NPP eulogized her for contributions to the party and residents of the North East Region.

Dr. Bawumia lost his mother on Monday, September 13, 2021. Hajia Mariama had been unwell and had been hospitalized over the past few weeks.

Hajia Mariama Bawumia will be buried on Tuesday, September 14, 2021, in Walewale in line with Islamic tradition.

They both sent out statements on their respective social media pages to mourn with the Vice President.

“On behalf of my wife, Rebecca, my family, the Government, and the people of Ghana, I convey deep sympathies to the Vice President, Alhaji Dr. Mahamudu Bawumia, on the sad loss of his mother, Hajia Mariama Bawumia,” Nana Akufo-Addo wrote on his Facebook page.

“I pray for strength for him and his family in these very difficult times. May Allah grant her soul eternal rest and  the highest level of Jannah.”

“I just got off the phone with my brother, Dr. Mahamudu Bawumia, to console him and the entire family on the loss of their mother, Hajia Mariama Bawumia earlier this morning. May Allah grant her a peaceful rest,” he posted on Facebook.