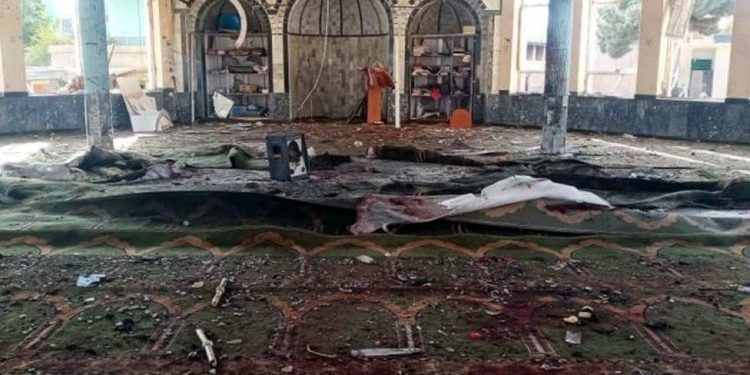 A suicide bomb attack on a mosque in the Afghan city of Kunduz has killed at least 50 people, officials say, in the deadliest assault since US forces left.

Bodies were seen scattered inside the Said Abad mosque, used by the minority Shia Muslim community.

More than 100 people were injured in the blast in the northern city.

The Islamic State group said it was behind the attack. Sunni Muslim extremists have targeted Shias who they see as heretics.

IS-K, the Afghan regional affiliate of the IS group that is violently opposed to the governing Taliban, has carried out several bombings recently, largely in the east of the country.

An IS suicide bomber reportedly detonated an explosive vest as worshippers gathered inside the mosque for Friday prayers.

Zalmai Alokzai, a local businessman who rushed to a hospital to check whether doctors needed blood donations, described seeing chaotic scenes after the attack.

“Ambulances were going back to the incident scene to carry the dead,” he told AFP news agency.

Local security officials were quoted by Tolo News as saying that more than 300 people were attending the prayers when the attack happened.

There are fears that the death toll will rise further.

The United Nations said Friday’s bombing was a “third deadly attack this week apparently targeting a religious institution” and was part of a “disturbing pattern of violence”.

The UN referred to Sunday’s bombing near a mosque in the capital Kabul that left several people dead, and an assault on a madrassa (educational institution) in the eastern city of Khost on Wednesday.

Meanwhile the US said diplomats would on Saturday hold the first in-person talks with Taliban leaders since the US withdrawal from Afghanistan.

During the two days of meetings the US would press the Taliban to respect women’s rights, form an inclusive government and allow humanitarian agencies to operate, a state department spokesperson said.