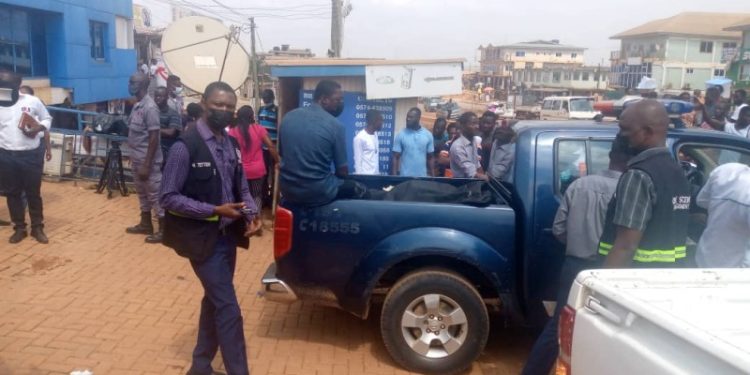 A 35-year-old worker of G4 Security has been found dead at the premises of the Atonsu-Agogo branch of the Adansi Rural Bank Limited in the Ashanti Region.

The lifeless body of Alex Opoku was bundled with his mouth sealed.

The Bank’s Automated-Teller Machine (ATM) was tampered with, and the monitor of the CCTV camera and a laptop were also taken away after the suspects broke into the facility.

Officers from the Ashanti Regional Police Crime scene were at the scene to commence investigations.

Police have since conveyed the body to the morgue.

The bank and management of the private security company are surprised the suspects did not take away cash and other valuables from the facility.

Assembly Member for Atonsu-Agogo Electoral area, Eric Osei, said the evidence available to him was bizarre.

“When I entered the bank hall, we saw that everything was intact. We don’t know if they came personally for the guy or what happened.”

“According to the manager, he said when they were going home, he left GH¢400 in his desk, but they came to meet it there. The laptops are still there.”

Mr. Osei also appealed to the police to intensify patrols at areas where banks are located.

“We know robbery usually takes place in the night, so why don’t they allow police to partner with the security, so they can help protect the bank?”