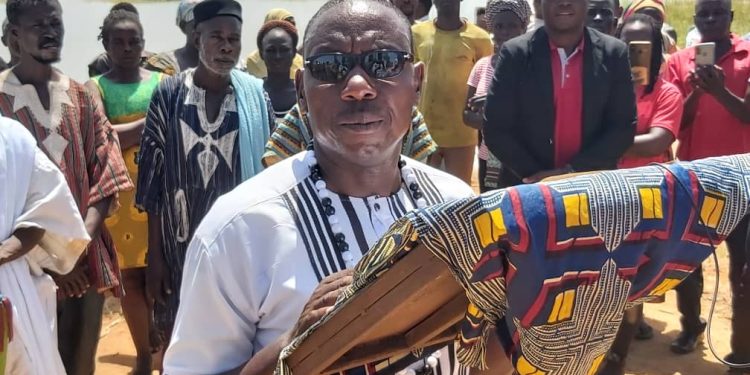 Residents of Vea and Gowrie in the Bongo District of the Upper East Region are appealing to the government to construct a bridge on the spillway of the Vea dam to avert the loss of lives and property.

According to the residents, the only road that connects the two communities to adjoining towns has been flooded due to excessive water from the dam.

They say the issue is adversely affecting their economic lives.

Residents now pay between GH¢5.00 to GH¢20.00 on a daily basis to board a canoe to access other communities.

They are calling on the government to urgently construct a bridge on the spillway for easy passage during rainy seasons.

Addressing a press conference at Vea, spokespersons for the affected communities, Milton Aberinga, accused government of failing to construct a bridge on the spillway, which serves as the only way that links communities between Vea and Gowrie.

He lamented that, commuters and residents are often disadvantaged, particularly during the rainy season, as the spillway gets flooded. He said in times like this, their only option is to rely on canoes to access social services which come at a cost.

Mr. Aberinga, bemoaned that, several appeals to get the government to address their concerns have proven futile.

“We the people of Vea, Gowrie, Awaa, Lungo and Nyariga demand the immediate bridging of the spillway to facilitate the development of the area and that, the purported contract covering the bridge, if authentic, must be implemented now.”

The situation has compelled residents to board canoes at exorbitant fares to either provide or access social services.

A canoe operator, Atote Emmanuel said, “Whenever we are in the rainy season like this, we use the canoes to cart people, and we make money from it. We charge between GH¢2 for helping a person to cross the spillway and between GH¢5 to GH¢10 for individuals and their goods. When carting motor-tricycles, we charge GH¢20,” Ayuule Herbert stated.

But residents and workers, who suffer the consequences of the situation, say it does not only affect productivity but sometimes lead to the loss of lives.

A physician assistant at the Vea health centre, Ayambila Marciana, bemoaned that, “We as health workers have to pay GH¢14 on a daily basis coming to work and going back home. Apart from that, some of our colleagues have fallen into this water because there are no life jackets for us”.

“The main problem is when we are referring pregnant women or critically ill patients with complications to the Bongo District hospital; it is always a difficulty because how do we cart the patient through this water? We are appealing to the government to construct a bridge for us”.

“When I get to this point on my way to work, I have to wait for several hours for the canoes to bring others from the other end and transport us across. We don’t get to school early as expected and this affects productivity badly. So we are appealing to the government to construct the bridge to ameliorate our plight,” Atongo Obed, a teacher, lamented.